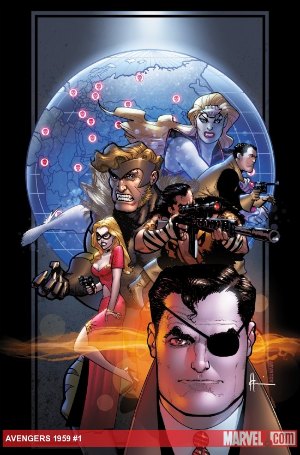 In the comics world, Howard Chaykin is a legend. His recent work at Marvel, on Punisher War Journal, Supreme Power and War Is Hell have all been great. Marvel just announced that his new project is Avengers 1959 which has Howling Commando and WWII war hero Nick Fury putting together a team of super humans to track down a group of former Nazis.

This book follows an arc from New Avengers, which featured a flashback to this team.

Chaykin said this about this new series, in the interview over on Comic Book Resources:

We’re going to take a look at New York in the 1950s, and we’re going to visit Madripoor and some of the great kingdoms of Marvel history. We’ll see other characters from that period show up in cameos and guest spots, which I will not talk about, but expect some fun and recognizable faces.”

The group that Fury recruits includes Sabretooth, Kraven, Namora (who has became quite popular since Agents of Atlas brought her back), the Blonde Phantom and Victor Fortune, a 1940s era profiteer that Chaykin created back in the 1970s.

Avengers 1959 debuts as a mini-series this October.