I’ll admit that I skipped Justice League: Cry for Justice due to all the negativity it generated on the Internet. I did read Justice League: Rise and Fall its sequel which deals with its aftermath. Mostly the Green Arrow family is drastically effected; their home of Star City has been destroyed by Prometheus, who not only managed to chop off Arsenal’s arm but killed his daughter Lian through his destruction of the city. In retaliation, Green Arrow killed Prometheus. Collecting issues from Green Arrow and Rise of Arsenal, this collected version deal with how Green Arrow and Arsenal cope with what’s happened. 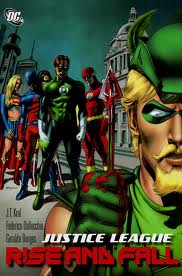 The theme of Green Arrow’s story is vengeance for what has happened to his city and his extended family. Unfortunately, there are consequences.

The Justice League is after him once they realized that Prometheus was murdered. Black Canary, his ongoing love interest, has shunned him since he is more interested in trying to kill Electrocutioner–a small time villain who Prometheus used to destroy Star City–than help survivors.

His son Connor is disgusted by his conduct, and Arsenal–who is like a son to him–is mad since he feels he should have been the one to kill Prometheus. To make things worse, even the city he loves is mad at him; the citizens blame him for making Star City a target and some enemies in its government want to make an example of him for taking the law into his own hands and killing a criminal.

Green Arrow is on the run and has an epiphany when he prevents his sidekick Speedy from killing Electrocutioner. Green Arrow doesn’t want her to make the same wrong choices he did, and he turns himself and the Executioner in to the authorities. Ultimately, Green Arrow is acquitted of his murder charges by a jury due to his life long dedication to Star City. His freedom is conditional–he has been banned from ever setting foot inside city limits.

Writer J.T. Krul does a really good job in getting Green Arrow’s point of view across. Green Arrow knowingly did something wrong because he honestly felt it was the right thing to do. Not only that, but he was willing to accept the consequences of his actions and didn’t want Speedy to follow his mistakes.

The second half of the book deals with Arsenal’s descent into self-destructiveness. The scene when he wakes up in the hospital only to learn that he has lost not only his arm but his daughter Lian is really heartbreaking.

Through flashbacks we learn how much Arsenal loved his daughter, which adds to how much his life has fallen apart. He’s mad at the Justice League for not being able to save his daughter. He’s mad at Green Arrow, since he felt that he should have ultimately been the one to kill Prometheus and avenge Lian’s death. He’s angry at Speedy, since she was supposed to have protected Lian. And even though the Justice League has made him a robotic prosthetic arm, its pretty much worthless.

Simply put, Arsenal is a mess. He does not cope. And ultimately, Arsenal turns back to heroin, which he famously did back in the 1970s, for a way to escape.

Just when you think it couldn’t get any worse, he is confronted by Cheshire, Lian’s mother. The two wind up arguing over the loss of their child, and get into a physical fight.

This only leads to the two getting really passionate, and a failed attempt at intimacy.

Arsenal gets humiliated yet again, suffering from performance anxiety, as showed in the picture to your left.

This is getting really uncomfortable to read. 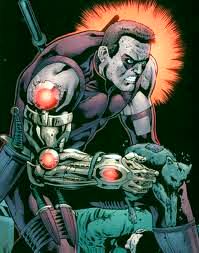 Yes...that is a dead cat in his hands.

So Arsenal gets crazier and his downward spiral only gets worse with his drug abuse. How bad do things get? He thinks he’s talking with Lian and has to protect her from some thugs. Unfortunately for him–and the reader– when Batman (his former best friend Dick Grayson) gets his attention, we learn that he was hallucinating. Lian’s dead–he’s been holding and talking to a dead cat, and he just beat the snot out of a bunch of innocent homeless people. Dick is trying to get his friend to seek help, but he doesn’t care. Arsenal is quite content with the fact that his life has been ruined and is using it as an excuse to personally go off the deep end.

The final scene of the book is at the Star City prison, while Green Arrow is locked up. Arsenal has broken in to kill the Electrocutioner. The warden asks Green Arrow to help them stop Arsenal, and he agrees. After some brawling, Green Arrow pleads with Arsenal to not kill Electrocutioner, as it doesn’t fix anything.

When you compare the two stories, Arsenal’s descent into madness is extremely uncomfortable. I guess that was the point of the story, and it certainly succeeded. When he was speaking to the deceased body of his daughter, I wanted to cry. The section with Cheshire was downright uncomfortable, and the bit with the cat made me want to vomit.

Kudos to Krul for putting together such a frightening tale of self-destruction. He won a PRISM Award for the portrayal of Arsenal’s drug abuse and mental illness. That’s actually a good thing, because if you can take away anything from this book its the importance of mental health.