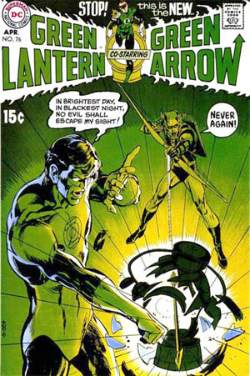 Writer Dennis O’Neil and artist Neal Adams’ stories of Green Lantern and Green Arrow traveling across America in the early 1970s are some of the best work from DC to come out of that decade. The premise was very simple. Green Arrow, who had recently lost his personal fortune, had become a modern-day Robin Hood, defending the poor and the less fortunate from crime both gang related and white-collar.

He urges Green Lantern, who usually fights off space invaders and super villains, to come with him and fight the real evils that are facing America–poverty, racism, sexism, drug abuse and more. Green Lantern was hesitant to do such a thing.

An encounter with an elderly black man only reiterates the importance of helping the common man to Green Lantern. The old man asked Green Lantern the following:

“I been readin’ about you…How you work for the blue skins.. And how on a planet someplace you helped out the orange skins…And you done considerable for the purple skins! Only there’s skins you never bothered with–! The black skins! I want to know… How come?! Answer me that, Mr. Green Lantern!” 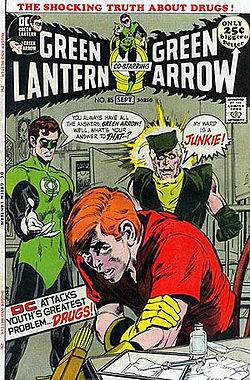 And thus, the “hard traveling heroes” were born. While they go on their journey, it is not just Green Lantern who reaches an epiphany. Green Arrow finds our that his sidekick Speedy is a heroin addict. For all of his work in protecting the community, he failed to keep his own house in order. After some arguing and going after the dealer, Speedy winds up quitting cold turkey.

The scenes where he is going through withdrawal are pretty horrific. Between that and the graphic scenes of drug use, this really makes you want to avoid getting involved with drugs. This storyline was very well received in the mainstream world, as the New York Times publicly applauded it as comic books had grown up.

unfortunately, this was only a short run and lasted only 14 issues. The pair have gone on to be the best of friends in DC comics. In the 1990s, Hal Jordan’s replacement Kyle Rayner and Oliver Quinn’s son Connor Hawke get to go on their own adventures together much as their predecessors did.