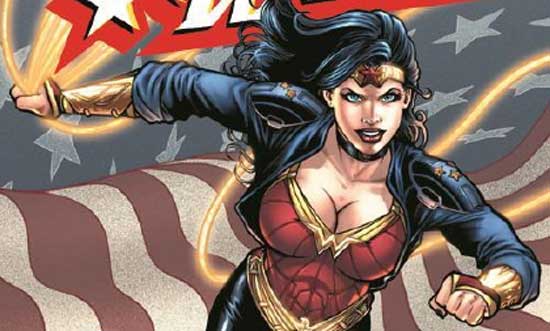 I want to talk about Wonder Woman today. I usually don’t spend too much time with this character, but I just finished reading Wonder Woman: The Odyssey Volume 1. And you know what? I enjoyed it.

The Odyssey is a story by mega writer J. Michael Straczynski and Phil Hester (who I pretty much link to his awesome time as penciller on Green Arrow) and deals with Wonder Woman realizing that everything is wrong with her life. Know, she didn’t have a bad date with Steve Trevor. But everything is different.

Her history has changed drastically and its up to Wonder Woman to find out how to fix it. Things are a lot more different than she is used to. The Amazons are hiding out in the slummier parts of New York City, as their home of Paradise Island has been destroyed and their queen Hippolyta is dead. To make things worse, the Morrigan–the war-goddess responsible for this–will not rest till every last Amazon is dead! You can see how this is a problem for Wonder Woman.

This was the first half of the story, and it was compelling enough for me to want to track down the second half. I can’t be the only one to like this. The New York Times had this ranked as the number one bestselling hardcover fiction book back on June 26. Good job, JMS and Hester!

What’s noticeable about this comic is the new costume designed by Jim Lee. It’s a lot more functional than her traditional gear, and the idea of Wonder Woman wearing long pants and a bomber jacket seemed to be too much for many fans. At first I wasn’t necessarily sold on the look, but Don Kramer made it work in this book. I like the new look, although her gauntlets look a little awkward due to her rolled up sleeves. Anyway, this was a fun read.

So what did you think?