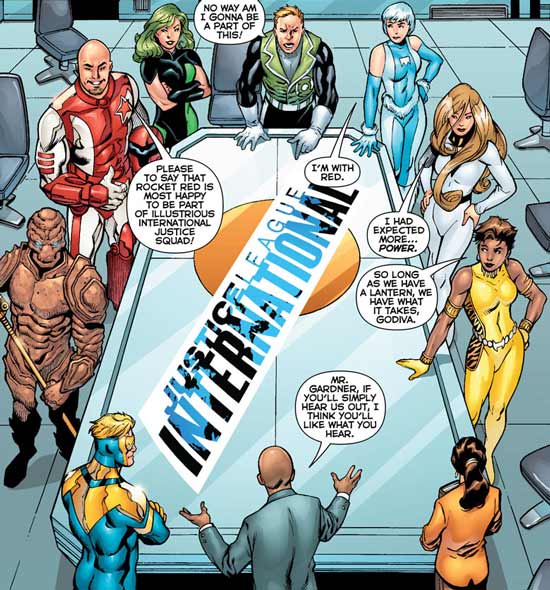 I finally found it! Justice League International #1 was found at a Barnes and Noble in Holyoke, Massachusetts on the way back from my friend Margot of White Hot Oven fame’s awesome wedding. So Sunday was a double treat for me–I went to a great wedding and got a chance to pick up the relaunch of one of my favorite comic book concepts. So how did Dan Jurgens and Aaron Lopresti do?

The new JLI is founded by the United Nations to be their own multi-national super hero team. It seems that in the New DC, people are much more skeptical of super powered types like in the Marvel Universe. Lead by the popularity seeking Booster Gold, the new JLI is made up of some of the usual suspects like Guy Gardner (who resents taking orders from Booster), Fire and Ice, and the current Rocket Red. The new additions are Vixen (a perpetually underused character in the DC pantheon), Godiva (a forgotten super heroine with magic hair who flirts with Booster continually) and August General in Iron, a Chinese super hero from the Great Ten.

The book is a lot of exposition, as to why the heroes were picked for the team and how they interact. Batman, well because he’s Batman, has to be part of the team. He joins up independently, as the UN doesn’t want him in due to his secret identity. The book ends with the team setting off on their first mission.

Lopresti’s art is fine, and Jurgens does a good job of getting across all the different personalities. I like that he’s writing Booster to be a stronger character/leader type, as he did in Booster’s recently ended solo book. Overall, I would give this a B+, as it was very good and definitely peaked my interest for the next issue.