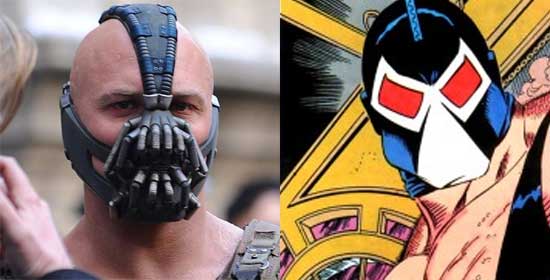 Let’s talk about Bane for a little bit. The co-villain of Christopher Nolan’s next Batman film has been the topic of a lot of conversation because of, well, how incomprehensible in a conversation he is. I’m not going to worry about that.

Instead I’m going to talk about his appearance. As he appeared in the comics, Bane looks like a huge professional wrestler, wearing a lucha mask. Nolan’s take on the character isn’t necessarily the same,but there is a similarity in the mask design.

The two are based on creating the illusion of negative space through a contrasting light and dark color scheme. Both feature wide eyes. It makes sense to me now, even though I was initially bothered by the design.

You can view the latest trailer below, which has a whole lot of Bane in action.