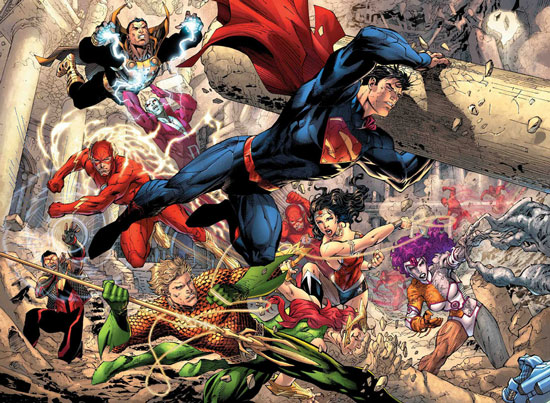 If the purpose of Free Comic Book Day is to attract the attention of non-reading super hero and comic book fans, did DC: The New 52 succeed?

I would safely say that this was more of a “preaching to the choir” type of promotional item. It really didn’t do anything to gain new readers. If the beauty of the New 52 relaunch was to attract new readers by making things clearer, this freebie furthers what’s going been on in DC the last year.

It starts out with some council of cosmic elders “punishing”  three of their own to wander the Earth. One of them is the hooded woman named Pandora who has been popping up since the beginning of the New 52. The other is a newly revamped Phantom Stranger. But the third is the new Question. Unfortunately he isn’t investigative reporter Vic Sage (or disgraced detective Renee Montoya) taking matters into his own hands. He’s now a dissident faced to wander the world faceless. Eep.

Pandora winds up infiltrating Steve Trevor’s ARGUS facility (in SAT analogy form, Trevor is to ARGUS as Nick Fury is to SHIELD) to steal the contents of Pandora’s box. Not only that, but they see a transmission of the Justice League of Earth 2. The story ends with the Justice League inexplicably fighting a group of other super heroes, including a new Green Lantern, Vibe, Green Arrow and what appears to be Black Adam. Now I’m confused.

What Geoff Johns wrote and the art team of Jim lee, Gene Ha, Ivan Reis and company drew wasn’t bad, there was just way too much stuff going on. Any one of these plotlines would have done, but don’t shove the introduction to Pandora’s back story and new characters into the first contact with another universe and a new group all at once. It was overkill.

The fun stuff was the two page previews for the next wave of New 52 titles. So what do I think about these?