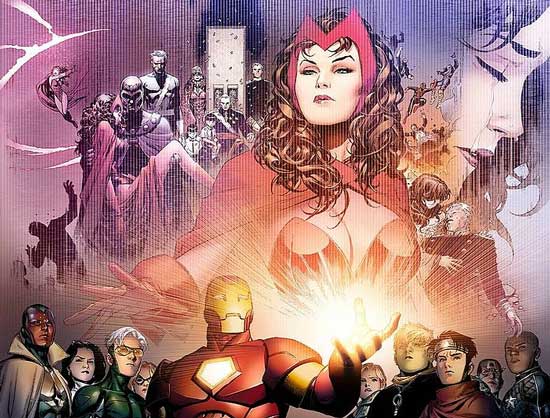 The 2000s were a terrible decade for the Scarlet Witch. She finally gas a nervous breakdown from when the children she had during her marriage with the synthezoid VIsion (having babies from your robot husband would be enough for most people); finally taking out her rage on her Avengers pal and later reshaping reality in a way that would make her father the villainous Magneto proud. Avengers: The Children’s Crusade is her chance at redemption.

It turns out that the Young Avengers Speed and Wiccan really are the reincarnated souls of her sons William and Tommy. They never really explain how this happened; I guess the writer Allen Heinberg had more interesting things to work on. With them believing that the Scarlet Witch is their mother, they set out with the rest of their team and an oddly helpful Magneto to find her. Obviously, the Avengers proper see this as a threat, especially with them not wanting her or the similarly reality-bending powered Wiccan to recreate the events of Avengers Disassembled. The X-Men have an interest in finding the Scarlet Witch too, as Cyclops in particular wants her punished for her forever changing the lives of mutants, when she was able to wish away most of their mutations.

Eventually, the young heroes find an amnesic Scarlet Witch about to get married to Doctor Doom, who has been protecting her and giving her refuge  the last few years. When I read that, it was a double take moment…he was doing the right thing.

Unfortunately, nothing that Doctor Doom ever does is for purely nice reasons. He caused her to have the crazy destroy everything nervous breakdown, and pretty much is the root of all evil in the Marvel universe the last few years. After he steals her powers, it is up to the Avengers young and old alongside the X-Men to stop him. And along the way, Iron Lad returns briefly (engineering some plot that will be revealed in the future when he returns as Kang the Conqueror) and there is a switch with the living and dead members of the Lang family–they are able to resurrect the father Scott (better known as Ant Man) but his daughter Stature is killed defeating Doom.

Children’s Crusade unfortunately has an ending that I still don’t completely understand. If you remember, the following people were after Scarlet Witch:

So what happens? Scarlet Witch winds up going on a journey of self exploration–they let her go. Really? REALLY? Since then, Scarlet Witch hasn’t made a peep in comics.

Ending aside, I really enjoyed this. At its heart, it’s a family story with a boy and his grandfather teaming up to save his mother. It’s very heartfelt, everyone from Quicksilver to Captain America, all play their part very well. And the art by Jim Cheung was killer.