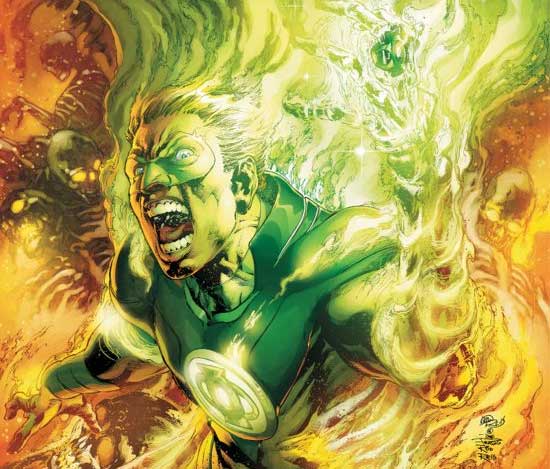 DC Comics has had comic readers–and the mainstream media–on a bit of a gay witch hunt to find out which of the newly relaunched characters was going to be revealed as gay. It turns out that it is Alan Scott, the original Green Lantern.

In some ways, changing his sexual preference was a safe choice.

They made Green Lantern, a franchise character, gay.

But not the Green Lantern that you know. They took  the one in the book Earth-2, which brings back DC’s old concept of multiple earths, this one which features the revamped Golden Age DC characters. It’s a big fish in a smaller tank in the aquarium basically.

I didn’t think so either.

But then there’s also more confusion to the casual/non-comics reading audience. Which is the Green Lantern? There was a similar problem with last summer’s Green Lantern movie. Thanks to the awesome use of John Stewart in the Dini/Timm Justice League, there’s a whole generation that is predominately aware of him and were confused by the white guy playing Hal Jordan in the movie. Now everyone is re-aware of Hal, and on the news they see that Green Lantern is now a blonde dude named Alan.

There’s also another ripple effect with this character change for Alan Scott, partly also effected by the changed of the New 52 relaunch. Scott was married at least twice to women; one of these unions producing two children–the super heroes Jade and Obsidian,  who was gay. Before this revelation, they didn’t exist and I wonder if this will be addressed.

Personally, I think this is a great idea. This is the most relevant the character has been since his original hay-day–the 1940s. I hope writer James Robinson goes all out with the character…have him be a bigger part of the Justice Society than any of the Big Three (Superman, Batman or Wonder Woman). Allan Scott has always been an interesting character and I’m glad they’re finally doing something with him again. Earth-2 #1 debuts on comic book stands on June 6.