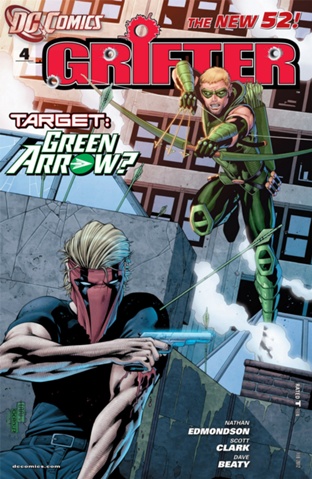 Everyone has been saying that the Grifter series has been pretty cool, and I was meaning to pick it up once Liefeld was on board. But I did manage to pick up Grifter #4 solely because of its Green Arrow connection.

The issue starts out pretty intensely; Grifter has crashed a car into the lobby of Q-Core (Oliver Quinn’s family business) trying to get some attention from someone, with a hostage. And as everyone knows, messing with the company owned/operated by a super hero only leads to violence.

What happens next in this issue is what really sold me on this whole series.

Scott Clark’s pencils are amazing, melded with a great three dimensional rendered background. It just makes the fight look that much more awesome, as Grifter and Green Arrow slug it out across the city of Seattle. It ends with the archer defeating him, but before he can be taken into custody he gets rescued by some chick on a motorcycle (who I assume plays a bigger role in the series).

But before all of this happens, Grifter tells Green Arrow that the only reason he set foot on the Q-Core campus was that the company had been infiltrated by Daemonites. This makes sense with the character Grifter, as the Daemonites play a role with the character going way back to the days when Wildstorm was still an independent publisher through Image Comics.

Nod to the past aside, this was a fairly good series. If only Green Arrow was as interesting on his own as he was in this. Unfortunately I’m not going to be sticking around, because he doesn’t stay in the series after the issue.