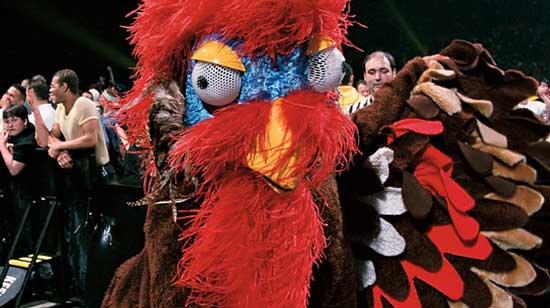 Who remembers the Gobbledy Gooker?  I certainly do. This over-sized turkey first appeared at the WWF’s Survivor Series in 1990. So how did we wind up with a turkey in the world of professional wrestling?

Before we start that, we do have to acknowledge that Thanksgiving night was traditionally one of the biggest days for professional wrestling events. The logic behind that is that by the evening, everyone is antsy from sitting around all day eating and wants something to do. Having a big event provides a perfect alternative from sitting around eating and listening to Uncle Jimmy tell the same tired story over and over again. Don’t believe me? The NFL and NCAA schedule tons of football games on Thanksgiving day, and wrestling promoters followed suit.

The WWE’s November pay per view event Survivor Series originally aired on Thanksgiving night, providing many a family with some much-needed entertainment. The 1990 show had a mystery of sorts to it, as to what exactly was in the big egg.

WWE programming would feature a big egg, with various personalities wondering what was inside. Was it a returning wrestler who had been not on television in a while? Had some huge star from one of their competitors like Sting decided to join the WWE? I remember watching every Saturday morning what was in the mysterious egg.

So what was in the egg?

A big giant turkey. Literally. Survivor Series watchers were treated to the debut of the Gobbledy Gooker…an anthropomorphic turkey that was full of enthusiasm. Unfortunately, the crowd wasn’t that receptive to the bird.

For the next few weeks, they tried to make the Gobbledy Gooker cool by having him hang out with various WWE personalities. This didn’t help the turkey, and eventually his goose was cooked after a few weeks.

Since then, the Gobbledy Gooker has made sporadic Thanksgiving time appearances in the WWE, usually as someone else wearing the costume to surprise their opponents.

The original Gooker was none other than Hector Guerrero, whom I got to meet at a TNA event in Trenton a few years back. He’s currently their Spanish-language announcer, and  super nice guy. It’s worth checking out his non-Gobbledy Gooker matches on YouTube.