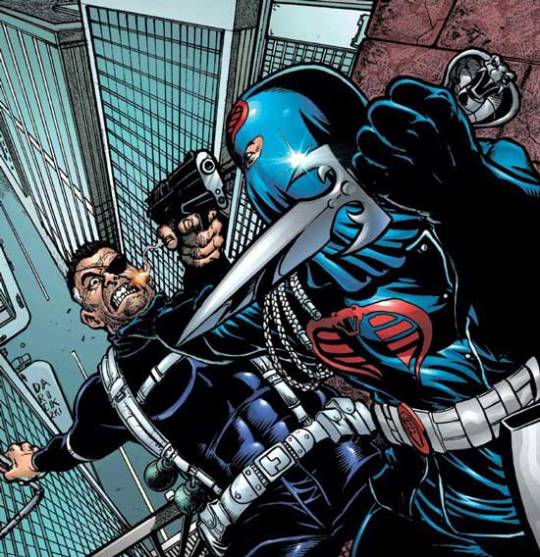 After taking most of the week off to feeling ill, it’s time for Friday Fights! One of the things I wondered about during my “lay on the couch because I have a cold” time, I wondered who would win in a fight:  Nick Fury or Cobra Commander.

The obvious answer is Fury, since he’s a veteran of pretty much everything, thanks to him not aging. He has enhances physical capabilities as well as has received every sort of combat, military strategy and espionage training known to man. Fury is also adept at all kinds of weaponry.

So that said, what chance does Cobra Commander have?

Whether its the cartoons or comics, the Commander is always shown to be a bit of a wimp. He doesn’t like to get his hands dirty and usually relies on the help of his subordinates when in a fight. So needless to say, chances are this isn’t going to be a fair fight.

Cobra Commander also isn’t the best trained hand to hand combatant  again he usually has someone else around to fight on his behalf. He is a master of escape.That said, I think Cobra Commander would narrowly escape Nick Fury. He would be in one of the Cobra “Trouble Bubbles” en route to his next safe house before Fury knew it.

So I’ll give this one a tie. Fury will always win the fight, but Cobra Commander will always escape.