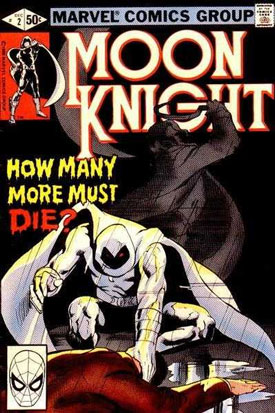 Let’s look at some of the early issues of the original Moon Knight series! Issues two through five are a lot of fun. So why should you give this a chance?

Writer Doug Moench really makes Moon Knight a complicated and interesting character, much more like a Don Draper then I ever expected. I was always under the assumption that the character was former mercenary Marc Spector having had some sort of near death experience that made him moonlight as the Egyptian themed hero.

That is a big part of the character, but there’s more to it. Spector is publicly living as the fictitious millionaire Steven Grant in order to use his ill begotten fortune as a soldier of war. But he also uses another alias, that of the taxi driver Jake Lockley as well. Basically you start to wonder which of these is the real personality of this character.

Spector’s complexities are only balanced by how great his supporting cast is, all of whom support him and assist his mission. He has a girlfriend, Marlene Alraune, who is almost as adept a combatant as he is.  There is also his longtime pilot/sidekick Frenchie. More privately in the Lockley persona, the old bum Crawler, a diner waitress named Gena and her two sons always go out of their way to help inform him of the latest street crime gossip.

The resulting stories have Moon Knight stopping various different criminals, including a psychopathic murderer, an antiquities thief and the criminal organization the Committee who armed Spector previously.

Covers and art in these issues was by Bill Sienkiewicz, who is such a great artist. I’ve always loved his more stylized work, but I never knew he used a more mainstream super hero comics style in his earlier projects.