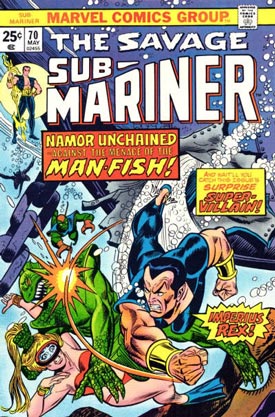 Keeping with the under the water theme, Sub-Mariner #70 continues the story of Namor trying to find a cure for the bio plague that has been unleashed on the Atlanteans.

It’s revealed that this poison was created by the United States government that can turn animals into wild monsters that they could drop into combat zones. There’s a ridiculous series of panel that shows cute little rabbits being turned into Sweetums-like monsters. Don’t believe me? You can view the page over on Marvel Comics Chronology. Conveniently it’s assumed that there is an antidote to this that can be found among the wreckage of a ship in the Pacific Ocean.

How convenient that our hero–a mermaid of sorts–can find the cure under the water. It would be funny if Namor would have to go somewhere random, like the Sahara Desert or an Arby’s in Passaic County, New Jersey.But no…writer Marv Wolfman set it in the ocean. How imaginative.

So Namor is looking through the wreckage only to be attacked by a group of Men-Fish. Pretty much, the Men-Fish are sea creatures that have been mutated by Doctor Dorcas.There’s that name again. The Men-Fish are pretty silly looking, seemingly more appropriate being member’s of Skeletor’s army of minions. And like minions, Namor is able to dispatch them fairly easily.

WHat Namor didn’t count on was the Men-Fish having a new leader of sort called Pirahna who can be described exactly how his name sounds. And that’s how the issue ends.

Not caring about spoilers, I looked up what happens in the next issue. Namor and Pirahna tussle some more until the Sub-Mariner beats him bloody. That in turns causes a school of piranhas to feed on Pirahna, causing the fishy villain a painful demise, and Namor leaves with the cure. Isn’t that irony!