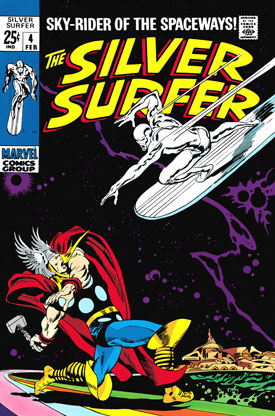 In this issue, Silver Surfer almost let’s his altruistic nature almost take the best of him when he encounters Loki.

The Asgardian’s story is pretty typical for this time. Loki really really hates his brother Thor and is always looking for new ways to destroy him. His latest plan involves using the Silver Surfer to do his bidding, with a little treachery.

Loki explains to Silver Surfer that his brother Thor is a huge miscreant and is a danger to Asgard. Silver Surfer, for all the cosmic power he wields, is a bit of a rube and believes Loki’s story. The two make a deal: if the Silver Surfer goes to Asgard and kills Thor (who is planning on taking over Asgard), Loki will remove the enchantment that keeps the Surfer imprisoned on Earth. He is a god of sorts, after all.

This plot really is textbook Loki logic. He has a problem that he himself can’t solve, so he manipulates someone into doing it for him. Surfer is transported to Asgard and is on a mission to kill Thor. Eventually the two meet, and Surfer attacks him as he thinks he is a liberator to the Asgardians. The whole fight sequence by John Buscema is filled with so much energy and kinetic-ism that it rivals something that Jack Kirby would have done during this period.

Surfer has the advantage in the fight and realizes that Loki is doing something to not only augment his powers, but control his body. He also notices that the Asgardians are coming out to protect Thor; if he was as villainous as Loki described, no one would be doing this. Surfer confronts Loki, who does admit that this has been a more villainous plan all along and sends Surfer back to Earth as he wasn’t able to live up to his end of the bargain.

Poor Surfer. He gets duped into doing Loki’s work and gets beaten up by Thor. But on a positive note, Thor wasn’t too mad at him as he knows the lengths Loki would go to in his diabolical schemes. The book ends with Silver Surfer still upset that he’s still trapped on a planet that he really doesn’t understand and had been tricked by someone he had trusted. The moral of the story: don’t help strangers.