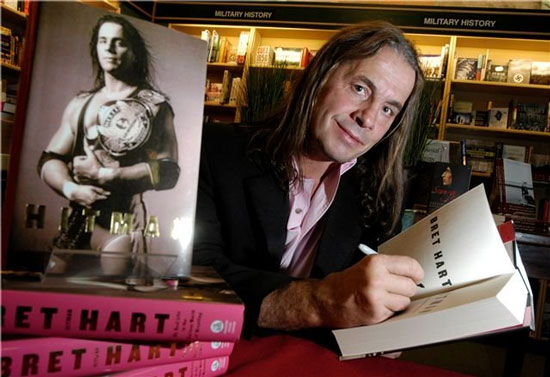 Speaking of massive books, I finished re-reading Bret “The Hitman” Hart’s massive memoir Hitman: My Real Life in the Cartoon World of Wrestling.  There is so much crammed into this book; it’s an invaluable guide to several key areas of pro wrestling lore.

Hart goes into great depth about several things. Obviously, the inner workings and dynamics of the Hart family (Canada’s wrestling dynasty) and his career are covered extensively. But just as he tells his own story, he tells several others: the history of Stampede Wrestling and it’s demise, the expansion of the World Wrestling Federation during the 1980s and its turbulent 1990s, the end of his business relationship with the WWF, the death of his brother Owen Hart, the mismanagement of World Championship Wrestling, and the accidental ending to his own career due to concussion issues.

Reading Hitman, you get the sense that Bret is a flawed person, as he goes into great detail of life on the road that is filled with perils involving adultery, steroids and substance abuse that claimed the lives of so many of his friends and colleagues. Every few chapters he recounts the deaths of wrestlers that he was close with. While he’s not travelling, he is dealing with an ever-increasingly difficult marriage with his wife.

If there is any one parallel in the book for Bret, it seems that he is a lot like Michael Bluth in the sense that he has to constantly put aside his own personal interests to protect his family from the outside world, each other and in some cases themselves. I never knew how close Bret was with the Dynamite Kid professionally.

Bret goes into great detail about the end of his career with the WWF at Survivor Series 1997 as a result of a personal and professional feud with Shawn Michaels, both on and off-screen. Perhaps the most depressing part of the book is him recounting the death of his brother Owen at a WWF pay preview in 1999, which completely tore apart the Hart family.

Remarkably, Bret really doesn’t come off as being bitter towards his peers or family, among all the public feuding that he has been involved with throughout his life. His goal was to not let the wrestling business destroy him, and he somehow managed to pull that off. He always had a strong relationship with his parents and his children, and seemed to have wound up with a better one with his wife Julie once they divorced.

Hitman shows Bret Hart as someone who took his job–and his legacy–very seriously. The book is his opportunity to tell the story of his own life and he put together an incredibly compelling story. If you are a professional wrestling fan, it’s a must read.

1 thought on “Hitman: My Real Life in the Cartoon World of Wrestling”