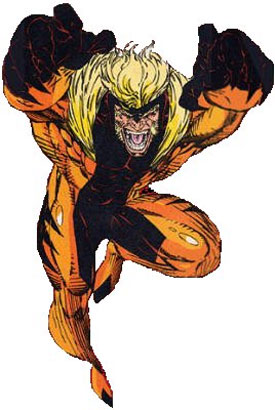 Sabretooth has always been a favorite character of mine. I know it’s all the rage to say that the Joker is the most evil villain in comic books but it has to be the big burly guy named Victor Creed.

Thanks to having a mutation that has gifted him a healing factor (and other predatory animal abilities just like his longtime nemesis Wolverine), Sabretooth has been around forever. Unlike Wolverine, he has no qualms about using deadly force at any times.

This lack of humanity, deadly abilities and no moral compass whatsoever makes him extremely evil. Plus his physical augmentation from Weapon X and several other evil organizations has only made him more unstoppable.

I just love how he never has any redeemable qualities. The few times he has seemed like a halfway decent person were when he was held captive by the X-Men and befriended Boom Boom or was a member of X-Factor, but those were to further his own motives. I even loved his portrayal in Avengers: 1959 where Howard Chaykin took this further by showing how bloodthirsty he will be when there is money involved.

So yes, Sabretooth is a really evil spirited immoral killing machine. I think that’s what also makes the Age of Apocalypse version (the one that was heavily featured in Exiles) such a great contrasting character. That Sabretooth is a role model to the other mutants, even taking in Wild Child and Blink as his pseudo children. I just love the direction that they took him in and it’s great.