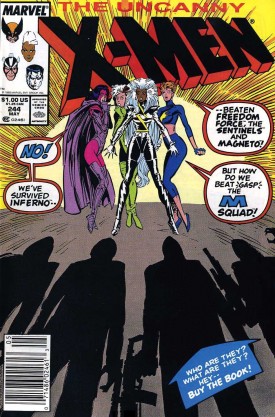 Uncanny X-Men #244 is the debut of everyone’s favorite firework/firecracker thrower Jubilee into the X-Universe! The story is by Chris Claremont and Marc Silvestri.

Jubilee has been causing a ruckus at the local mall with her mutant powers (this is so late 1980s it makes me sick!), causing the local mall security to call in the M Squad. Basically they are a private mutant hunting group that you call in. Instead of being pest control for mice, they hunt super humans.

Back at the X-Men’s temporary headquarters in the Australian outback, things are getting difficult for the X-Women. Mostly they just hate it there.

So Dazzler winds up convincing them that they need a day at the shopping mall to cheer them up. Things get weird with her, Storm, Psylocke and Rogue shopping and eventually going to a male revue. You read that right. What kind of shopping mall is this?

Eventually the M-Squad finds the X-Women and there’s a bit of a light scuffle between the two groups. The M-Squad are more like the Keystone Cops, and it’s up to the mutants to save everyone in the mall! As they teleport back home, Jubilee decides to join them and runs into the portal just in time.