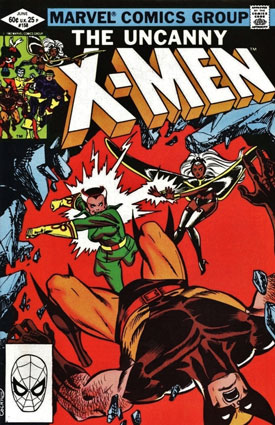 Talk about two issues that have completely different plots! Uncanny X-Men  #158 and 159 have the X-Men travelling between Washington DC and Manhattan.

In issue #158 Storms and Wolverine go about breaking into the Pentagon to delete all the files that the military has about the X-Men. They do this because Ms. Marvel has been hanging out with them and happens to have the credentials to get them in the door. This is also the type of plot you get when your writer, in this case Chris Claremont, is writing two different comic series at the same time and wants a crossover.

While in the Pentagon, Wolvie and Storm wind up throwing down with both Rogue and Mystique, who are independently getting into trouble there. It’s just a weird series of events, and I think it ended with Ms. Marvel deleting some of the information that the Pentagon had on her.

Issue #159 has the X-Men dealing with Storm, who has been been turned into a vampire thanks to a vampire bite from Dracula.

The X-Men race to find a cure but aren’t successful. There is lots of fighting with the new and vampire improved Storm, who royally kicks the crap out of them.

Then in a weird twist of niceness, Dracula shows that he isn’t really that bad of a guy and returns her to her normal form. Total waste of an issue.

I read some more Uncanny X-Men from the Chris Claremont era. This issue seems to have a million different artists on it (including Dave Cockrum and Bob Wiacek) and starts off in typical Claremont fashion with the X-Men in the Danger Room.

Activity time doesn’t last too long, as Corsair and the Starjammers pay a visit to the X-Men. Along the way they manage to stop an alien invasion of some sort, Corsair reveals to Cyclops that he is his father (which the uni-eyed hero doesn’t or doesn’t want to believe) and it’s revealed   that the Shi’ar are blaming the good people of Earth and the Starjammers for the disappearance of their beloved empress Lilandra.

Along the way we get to see Professor X in one of the worst outfits that he’s ever graced a comic book in: a yellow safari outfit, complete with hat. He looks like he’s more mentally equipped to be a zookeeper that looks after Curious George instead of being the premier advocate of mutant kind. But then again, it’s the eighties everyone.

The X-Men are still reeling from the loss of Jean Grey (who died as a result of the whole Dark Phoenix Saga) and Cyclops (who has gone on leave, since his girlfriend was Jean and all). That said, there is a lot of exposition in this issue from the Claremont/Byrne era..

The team is getting used to having Storm calling the shots, which isn’t too much of a problem for anyone. Angel is still trying to work his way back into the team, and, well, sucks at it.

Kitty Pryde has officially joined the X-Men as an active member, and there’s a series of panels of her trying to come up with a code name that is just so annoying. No wonder everyone thought she was so insufferable.

The most interesting part of the comics is the Wolverine and Nightcrawler subplot, with them going off to Canada to resolve some of Wolvie’s unfinished business with the government and wind up going Wendigo hunting. It also seems to be the first issue of Wolvie in his brown/yellow costume and the first instance of him being called Logan to boot.

It makes perfect sense that Marvel would put out some Disney-themed comics. When they announced that there would be a Figment series, I will admit that I was a little skeptical. The little purple dragon is one of the most beloved characters in all of the Disney Parks and has a lot of emotional cache. It would be hard to do him justice.

But the creative team of Jim Zub and Filipe Andrade managed to do it.

The second issue has Figment and the Dreamfinder–who has the birth name of Blarion Mercurial–traveling into another dimension through some sort of interdimensional riff. As they explore a realm with furry creatures and small elves that look like they were straight out of Avatar, alien robots are coming through into London.

Figment is a very light, whimsical fantasy book that is suitable for all ages. It reminds me of the Adventure Time comics in a way. But what makes this a good read is that it captures the spirit of the original theme park ride.

Uncanny X-Men #135 is a key part in the Dark Phoenix Saga. Basically Phoenix goes completely nuts, killing off all the nice people in the picture above. So why do we care so much?

By this point it becomes perfectly clear to the rest of the X-Men that Jean Grey is gone and that the Phoenix Force has completely taken over her physical form. Unfortunately, there isn’t much left that they can do to stop her, short of killing her.