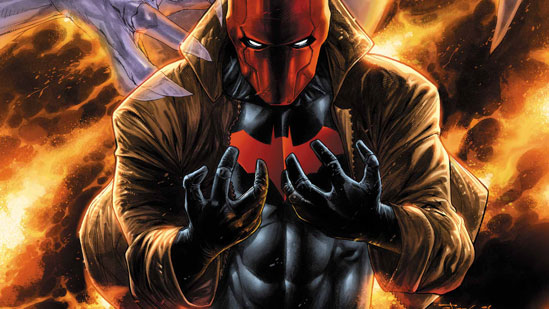 I’ll admit, I don’t remember what has happened in the last few issues of Red Hood and the Outlaws. I’m getting old; what can I say. The issue starts out with Red Hood having just taken out a whole buildings worth of thugs and his narration is about him taking the Venom (the same super-steroid that Bane gets his powers from) and just kicking ass. As he exits everything is on fire and he finds Arsenal’s quill.

Arsenal is getting dropped off at a hospital by Starfire. He’s severley burnt over most of his body but she’s not sticking around. A barely conscious Arsenal gets visited by both Red Hood and Green Arrow in their civilian gear. They have some awkward conversation about what has happened and Roy is barely coherent. Before they wind up getting into fisticuffs in the hospital, the mystical warrior Essence that Red Hood has known for a long time shows up to tell them that Roy will fully recover. Red Hood leaves to find Starfire, and Green Arrow and Arsenal have strained conversation, since they are former best friends and all.

As this goes on, Starfire goes to Poland to take some alien drugs. So I guess she’s the junkie and not Roy in this reality.