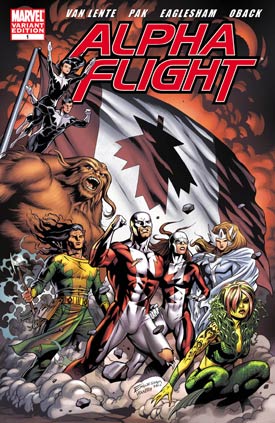 Alpha Flight had a brief reintroduction during the Feat Itself storyline. Canada’s favorite (and only)  team comes back, this time in what can only be described as a super powered political thriller.

The Unity Party has come to power in the Canadian government and has Alpha Flight in their sites. The city of Vancouver was heavily damaged by the Fear-powered Attuma, and the super hero team has been blamed for failing to protect the city. Alpha Flight is on the run from the government. This kind of reminds me a lot like the Civil War storyline, except this time it’s across Canada.

It’s revealed that the Unity Party is secretly led by none other than longtime nemesis Master of the World (who simultaneously has the coolest and lamest name of any super villain ever). He’s dispatched a squadron of old Alpha Flight villains out to take them out.

While this is going on, the team is having their own personal difficulties to overcome. The Vindicator has begrudgingly teamed up to hunt her former teammates in exchange for regaining custody of her daughter. Northstar’s boyfriend Kyle has been taken prisoner by the Unity Party and is undergoing some sort of mental reprogramming that all non-Unity Party members are being forced into. And to make matters worse, Northstar’s sister Aurora is having a relapse with her split personality disorders. As a light Alpha Flight reader, even I know that isn’t good.

At least the team had the good sense to put out a call to Wolverine for some help and assistance in liberating Canada. What makes this

This was written by the team of Greg Pak and Fred Van Lente, both of whom I’ve been a big fan of. I really liked that this wasn’t heavy on prior Alpha Flights history. I’ll admit, I was never that big of a fan. But I was able to pick up what had happened in previous volumes. Dale Eaglesham’s art was great as usual, and I’m sure him being a Canadian made the depictions of the cities more accurate. Fun stuff; you should check it out.

I would be remiss to not talk about the horrible tragedy at the midnight screening of The Dark Knight Rises on July 20 in Aurora, Colorado where a gunman stormed a movie theater with tear gas and gunfire, killing twelve people and injuring dozens before being apprehended by local authorities. I can’t even imagine the sadness felt by the survivors of this incident, let alone how the family and friends of those who lost their lives.

What gets me most about this is how senseless the killings are. These were people who just really liked Batman and were excited to be the first people to see the movie so they could tell their family, friends, loved ones and co-workers how much they enjoyed it. Instead, the survivors are telling how horrific the whole night was. And they are the lucky ones; twelve people didn’t get to go home or get to tell their family they were safe.

We read comic books and watch their subsequent adaptation because of the heroism of the characters, standing up to protect people and to do the right thing. That night there were real-life heroes. Three men died protecting their girlfriends. Each day there are more accounts from survivors risked their own lives to help others in that movie theater.

These people truly are heroes, willingly putting themselves in harm’s way to help another. It reminds me of General Omar N. Bradley’s quote from World War II

Bravery is the capacity to perform properly even when scared half to death.

And these people were all truly brave. If you want to help, Jason Boog from GalleyCat compiled a list of ways you can help organizations serving the people of Aurora, Colorado.

So how does Canada Day count as something I like about comics? Canada is a very important part of the comic book world for many different reasons!

The first and most obvious way is that the comic book world has seen its fair share of prominent comic book creators! This goes back as far as Joe Shuster–one of the co-creators of Superman! Did you now that John Byrne, Todd McFarlane, David Sim, Stuart Immonen and Hal Foster are just some of the great comic book artists that the Great White North has produced? Just imagine how much less fun comic books would be without them.

Although there are many Canadian super heroes (and super villains), Marvel has the most elaborate Canada in comics thanks to Byrne, who is graduate of Alberta College of Art and Design in Canada. Byrne’s first high-profile work was on Uncanny X-Men with Chris Claremont, where he created Alpha Flight, a super hero team mostly made of Canadians!

Sasquatch is one of the many proud Canadian super heroes.

Alpha Flight was a project of the Canadian Department of National Defence’s Department H. Although the team’s lineup rotated, it usually featured Aurora and her twin brother Northstar (the first gay super hero), Arctic tundra goddess Snowbird, the gamma-radiation created man monster Sasquatch, and the diminutive Puck. Alpha Flight was the best of Canada’s three government organized super hero teams, ahead of Beta Flight and Gamma Flight. To continue the flightiness, there was even an Omega Flight, which was a group of villains who wanted to take out sometimes Alpha Flight leader Guardian.

Alpha Flight has been a staple of the Marvel Universe since introduced back in 1979. They’ve had countless on going and limited series through the years. But that’s not the only way Canada contributed to making super heroes.

Wolverine would be a monster on the blueline.

Just as the real world Canada is allies with the United States, the same goes for the two nations in the Marvel Universe. Weapon X is the Canadian branch of the Weapons Plus Program, an agreement between the two nations to create super soldiers that goes back to World War II.

Grant Morrison added this new wrinkle to Weapon X during his run on New X-Men in the early 2000s. On the American side, their biggest success was the creation of the Super Soldier Syrum which powers Captain America.

So let’s celebrate Canada Day by honoring the country’s great comic creators and characters! Crank some Rush, drink a Molson if you want and have a great day!