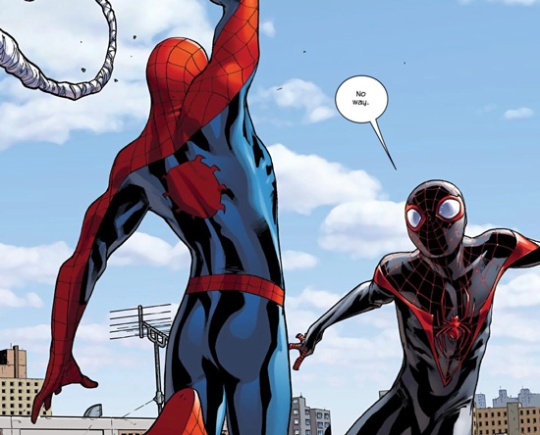 Peter Parker has had a rough couple of weeks, with switching bodies with Doctor Octopus and dying and such. Spider-Men is a glimpse to a more lighthearted adventure, with him entering the Ultimate Universe and meeting the Spider-Man of that reality.

The only thing that I really wasn’t too keen on this story was how Peter winds up getting into the Ultimate Universe. Longtime illusionist and lame villain Mysterio has acquired some sort of trans-dimensional gateway that Peter accidentally activated, sending him to another reality where he meets Miles. Mysterio now has the opportunity to kill the two Spider-Men.

While dodging Mysterio’s robot avatars and such, the two bond. Miles really looks up to Peter, who himself is amazed on how respected the alternate version of himself was by the people of Ultimate New York. Knowing that he doesn’t belong, the Ultimates agree to help find a way to send Peter home.

The best parts of Brian Bendis’ story are when Peter meets up with this world’s version of Aunt May and Gwen Stacy, both of them who are still mourning the loss of their Peter. Things are also odd for Peter, as he’s talking to a version of a girl he was deeply in love with, but whose life was cut short in his reality.

This really was really made the book for me were these exchanges. Peter and Miles could have not punched a whole thing through it; the story was fine without any action. There was plenty; the Spidey’s and the Ultimates team up to stop Mysterio. The ending is a little odd; Mysterio learned a lot about Peter Parker’s secret identity and such by watching him through his device, and the Ultimates wound up imprisoning him in their world to keep Peter’s secrets safe. But mostly it’s important for Miles and the Aunt May and Gwen that he knows; they were able to get closure knowing that somewhere there is a Peter very close to the one that they knew who is living a wonderful life.

When that Peter got home he Googled Miles, and we don’t know what he found online. But between that and Mysterio stuck in the Ultimate world there are two plot points to pick up at a later date.

The art on this was by Sara Pichelli, whose work is really growing on me. I read that she does most of her work on a Wacom tablet and I’m amazed about how thin her line work is. It’s very clean and looks great.

Getting back to Spider-Men, I give it a glowing recommendation  It’s more a Miles than a Peter story, but it doesn’t matter which Spider-Man you prefer. It’s a great Spider-Man story all around. 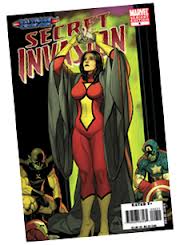 Fun fact…I’ve been waiting a few years to finish reading Secret Invasion. Mostly because It took forever to find the sixth issue of the mini-series.

I picked up the Baltimore Comic-Con 2008 exclusive Frank Cho cover. Why? Because Spider-Woman drawn by Cho is just awesome. So let’s talk about this missing chapter from my collection. Bare in mind, that its been YEARS since I read the mini-series and I’m not going back to look up things. I’m going to live blog this reading experience. Be warned!

The book starts out with Noh-Varr (who most recently betrayed earth) promising the Skrull who thinks he is Captain Marvel that he will protect the Earth. There’s an advertisement for Terminator: The Sarah Connor Chronicles which I seem to have been the only person who enjoyed it. Sigh.

Getting back to the topic, the series is approaching the all-out slug-fest that we all love in comics. One one sand you have the Skrull legions, lead by the impostor Skrull-Spider Woman, ready to take over the planet. A cause which has oddly picked up support from mankind. And on the other, the allied front of registered and un-registered super heroes, Nick Fury’s team of Secret Warriors, Norman Osborn’s Thunderbolts and Kevin Sullivan’s Army of Darkness. Well maybe the Dungeon of Doom. Either way, there was a huge army of Marvel characters and no one representing Sullivan. And in case you are wondering, Kevin Sullivan was a pro wrestler back in the day.

And it’s done. It really was a quick read. On its own, it really doesn’t stand up. But as part of the larger narrative it works. The art by Leinil Yu is phenomenal though. Secret Invasion really made me turn a corner on him with his style. 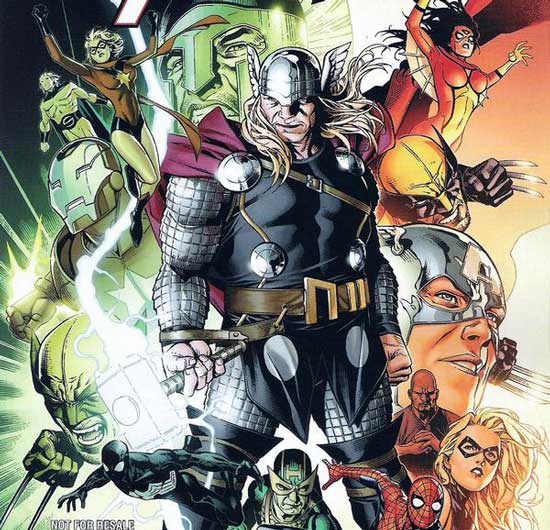 Let’s take a trip in the old way back machine and look at Marvel’s Free Comic Book Day 2009 offering, which pitted the Avengers against the Avengers–technically Norman Osborn’s Dark Avengers.

The two teams have to put aside their personal differences, mainly Norman and company trying to arrest the other group for treason, and the Avengers proper not taking to kindly to being impersonated by super villains, to help Thor stop the frost giant Ymir from merging his world with Earth.

Brian Bendis does a great job stresssing how much each group really dislikes each other. He also manages to compare the two teams, with the real Avengers being able to work together (and even with their evil counterparts to a lesser extent). Meanwhile, Norman’s kooky crew can’t get along. I also like how Thor is portrayed as being quite aloof, as he is still a little upset with Iron Man over the whole Clor debachle. Young Avengers’ Jim Cheung does an amazing job on the art side of the book.
So how did this book do as a Free Comic Book Day selection? It did a fair job of showing new readers, whether they just came in for a free comic book or a longtime reader, exactly what was going on in the Avengers book. I give it a thumbs up. 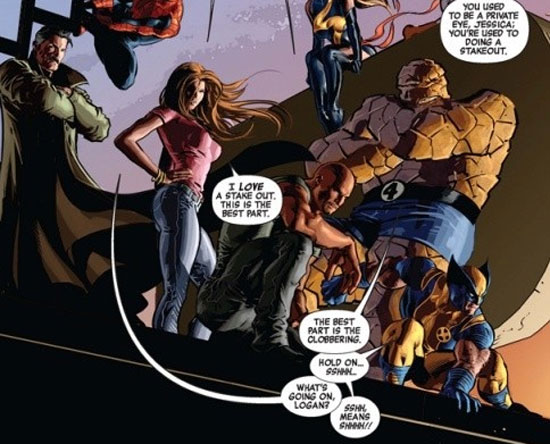 I guess you could figure out that I’ve been on an Avengers kick as of late. New Avengers: Volume 2 collects issues 7-13 of that series by Brian Bendis, and there is a lot that’s going on to this group of Earth’s mightiest heroes.

This takes place around the same time as the Fear Itself crossover, and there is a bunch of fun stuff that happens in the first half, ranging from the team convincing Dr. Strange to join their ranks (with art by Stuart Immonen) to why Luke Cage and Jessica Jones can never have an evening to themselves (with art by David Acuna).

The best part is the second half has Bendis and Mike Deodato putting the Avengers on a botched raid of a H.A.M.M.E.R. storage depot. Following this, the group deals with it seeming more and more that Victoria Hand is a double agent that tipped off H.A.M.M.E.R. about the raid, and Mockingbird is gravely injured. As this happens, there are flashbacks of Nick Fury’s Black Ops Initiative (which gets further explored in Avengers 1959) tracking down a briefcase that was in the Nazi remnant’s possession–and later in that H.A.M.M.E.R. warehouse.

So what was it? It was a Nazi-made mix of the Super Hero Soldier Syrum that made Captain America and the Infinity Syrum that keeps Nick Fury eternally young. This could possibly save Mockingbird’s life, and there is a great scene with everyone argues over the moral implications of how it could either kill her instantly (since it was a Nazi knockoff, after all) or grant her unwanted immortality.

Really, this was a lot of fun on its own, but it was put over the top with the fifties flashbacks drawn by Howard Chaykin. That reminds me, I still have the final issue of Avengers 1959 that I’ve been meaning to get around to reading. 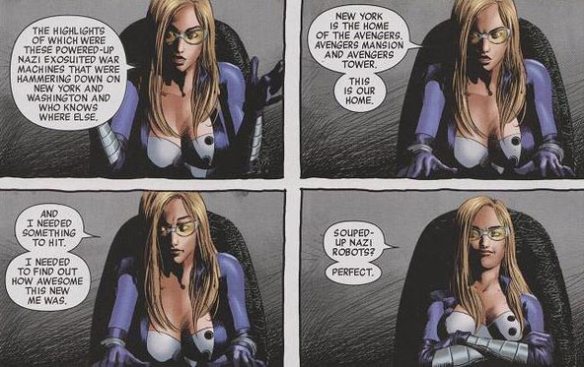 I usually don’t read the tie-in issues of the event comics, but I gave this a shot. Fear Itself: Avengers does a great job supplementing the Fear Itself event, by collecting some issues of Brian Bendis’ Avengers and New Avengers comics from that time, giving insight into how the Earth’s mightiest heroes are dealing with this crisis.

Bendis shares the Avengers point of view of these events in a unique way; the story jumps from the current time to later on when they’re interviewed by an author chronicling the history of the team.

This narration sets the tone for the rest of the book. It’s not what the Avengers did during this crisis that is covered, but how the team dealt with the impact of this event. Luke Cage and Jessica Jones argue about what it means for them to be accepting money from the government to be Avengers. Spider-Man can’t trust  Victoria Hand (a former executive in his enemy Norman Osborn’s H.A.M.M.E.R. forces), who is now serving the Avengers in a similar capacity. Mockingbird is still coming to terms with both her return and Infinity Syrum given powers, while her quasi-ex-husband Hawkeye is growing more attached to Spider-Woman by the way. Squirrel Girl also gets some face time, as she has taken a job as Luke and Jessica’s daughter Danielle’s babysitter, and has to protect the child as the Avengers Mansion is stormed by Sin’s Nazi army. There is so much going on in this book that works to set up future stories just as much as the main Fear Itself book.

Usually these types of books just supplement the crossover, but this goes beyond that. It shows the dynamics of the team, and that these super heroes have the same concerns as we do–financial security, relationships and self-doubt. Not to mention, some awesome art from John Romita Jr., Mike Deodato Jr. and Chris Bachalo.