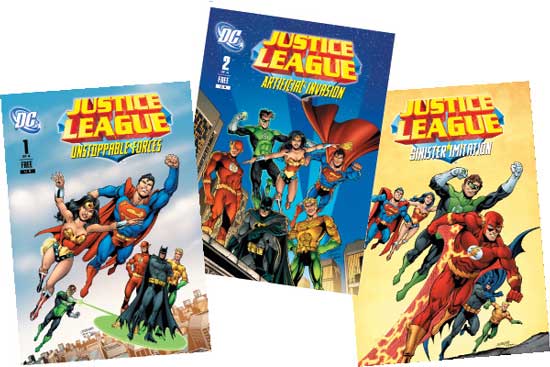 Cereal and comic books go together like, well, cereal and Saturday morning cartoons! General Mills teamed up with DC Comics to make a series of special tiny comics for the prize at the bottom of the cereal box this past fall/winter featuring the Justice League!

One of my coworkers thought enough to share the copy of Justice League: Sinister Imitation that came in her Golden Grahams. So how was this delicious comic? Well, for starters, it features a cover by Dan Jurgens which is always a good thing.

The story pits the Justice League against the evil Toy Man and his villainous doppelgangers. It is a short, simple super hero story suitable for all ages. As a promotional item, this succeeds as it introduces the primary heroes in the DC line without being cheesy.

That said, there was one thing that I questioned. This came out well into the New 52 relaunch, yet the characters all had their traditional costumes. I guess they didn’t want to turn off or confuse new readers. Either way, still a nice promotional effort.