Amazing Spider-Man #698 came out today, and it is definitely one of those issues that was designed to be a big deal. So what’s so special about this? Peter Parker dies.

Amazing Spider-Man is getting re-launched as Superior Spider-Man in January, so I’m sure this storyline will have some sort of temporary resolution, with the long-term leading to Peter Parker returning to his status quo of being Spider-Man and you know, being alive.

So how does Spidey come back?

Someone, say Mary Jane or even Aunt May could make some sort of deal with Mephisto to restore the status quo. This would be a bookend of sorts to the One More Day storyline where Mary Jane made a deal with the devil to save Aunt May’s live in exchange for her relationship with Peter to have never existed. Is it possible that Mephisto would offer someone else a similar deal to save Peter’s life?

Spider-Man also has an outstanding favor due to him from Loki. In Amazing Spider-Man  #503-504, the trickster god needed the assistance of Spidey in saving his mortal daughter. Even though Spider-Man is technically dead at this point, Loki could decide to do him a solid and return him rightfully back to the land in the living. I am not sure if this is possible, since Loki himself was reborn as a teenager, but it’s a debt he owes nevertheless.

Regardless of how they bring Peter back, it has to be well executed and I have good faith in writer Dan Slott being able to pull it off. 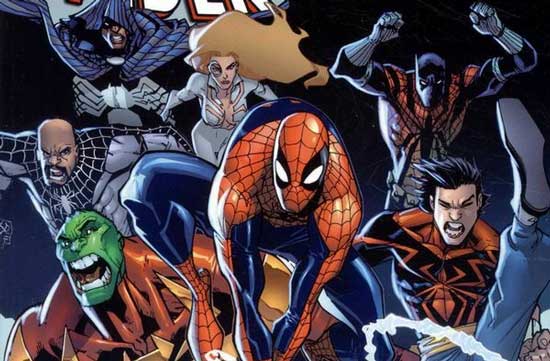 Spider-Island was writer Dan Slott’s massive epic storyline from 2011 that somehow manages to be very subtle at the same time. The result is a fun story which has a butt load of fun. Peter Parker thinks that the least of his troubles is going to be Aunt May moving to Boston when everyone in Manhattan–every day citizens and street criminals alike–winds up gaining spider powers.

So who is behind this arachnipowered mess?

Slott drudges up the Jackal (the green monstery looking fellow behind the ridiculous Clone Saga of the 1990s) and the even more obscure Spider-Queen. The duo has planned to turn everyone in New York into some sort of mindless spider/human hybrid that she conveniently has control of. There’s also two giant monster-sized spider creatures that are the transformed versions of Steve Rogers and Kaine (the sometimes villainous Peter Parker clone that has survived all these years).

As Spider-Man has to team up with the Avengers and the rest of the NYC based heroes to stop this, Slott does a great of balancing how this effects Peter personally. Peter’s girlfriend Carlie dumps when she finds out he’s really Spider-Man. He also has some weirdness with ex-girlfriend Mary Jane along the way.

The collected edition contains a few tie-in issues from the Venom series, with Flash Thompson having to balance his duties as a super hero with spending what little time he has left with his terminally ill father. There are also a bunch of scenes with both Flash-Venom and the Anti-Venom (the original host of Venom Eddie Brock now has a symbiote called Anti-Venom), and there is a bit of a weird love triangle between the two of them and the venom symbiote. Eep.

Ultimately the story ends with both Spidey and Anti-Venom being the heroes of the day, as the symbiote could cure Jackal’s mutations. The best scene in the story by far is when Peter records a viral video of himself encouraging everyone to use their powers for good and to not use them to loot the city.

Art on this was handles mostly by Humberto Ramos and Stefano Casselli, who I’ve been a huge fan of since his days on the Devil’s Due GI Joe stuff. I can’t describe what it is exactly  that I enjoy about his work, but it just does it for me.

Spider-Island was definitely a fun read. A great book to bring along while on vacation or at the beach.

I’m still recovering from Thanksgiving dinner! Here’s a sketch of the new Flash Thompson Venom that’s been popping up in the Marvel Universe by writer Dan Slott. I know your probably confused, why did I get the writer to draw a sketch?

Aside from it being unique, a lot of writers draw some funny stuff and are very creative on the fly. I like how Dan made Venom not only look angry, but the little quote added so much to the sketch.

This is going to be the only post for the day, and we’ll get back on track for tomorrow!