It makes perfect sense that Marvel would put out some Disney-themed comics. When they announced that there would be a Figment series, I will admit that I was a little skeptical. The little purple dragon is one of the most beloved characters in all of the Disney Parks and has a lot of emotional cache. It would be hard to do him justice.

But the creative team of Jim Zub and Filipe Andrade managed to do it.

The second issue has Figment and the Dreamfinder–who has the birth name of Blarion Mercurial–traveling into another dimension through some sort of interdimensional riff. As they explore a realm with furry creatures and small elves that look like they were straight out of Avatar, alien robots are coming through into London.

Figment is a very light, whimsical fantasy book that is suitable for all ages. It reminds me of the Adventure Time comics in a way. But what makes this a good read is that it captures the spirit of the original theme park ride. 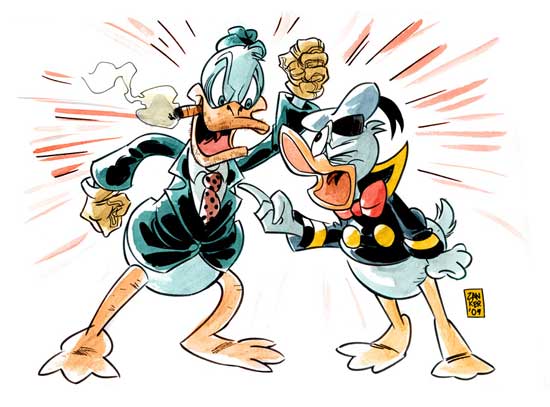 This week we discuss who would win the battle of toughest waterfowl–Howard the Duck vs. Donald Duck. These two have been feuding on and off over the years; there was even a lawsuit between their respective parent companies Marvel and Disney. So what would happen if these two pants-less ducks did battle?

Neither one has a size or physical advantage over the other. Howard is known for chain-smoking cigars, so that may have some stamina issues. Over the years, we’ve learned that Donald Duck is pretty lazy so I would assume he isn’t in the best physical shape.

So do either duck have any fighting abilities? Howard is the master of the martial arts fighting style known as Quack-Fu. Donald doesn’t have any formal fighting skills, although I would assume that he did learn some combat skills over the years. He did serve in the navy during the DuckTales cartoon series. That said, Howard would have the fighting advantage.

But who would I put my money on?

Donald. He’s ruthless. I imagine–thanks to years of cartoon watching–that he would run around throwing things and punching poor Howard. Imagine a duck version of the late Bruiser Brody. WINNER: Donald Duck

I stumbled across this vintage Tron Light Cycle in my basement a few weekends back and how cool is it! This was part of the Tron toyline that Tomy produced back in 1982, pretty much around the same scale of the Star Wars and GI Joe action figures from that time period.

In the Tron movies, the light cycles were not only a mode of transportation but for combat games on the grid. As you can imagine, this is a speedy form of transportation and this toy reflects that. It has a pull back rip cord that launches it pretty far.

I picked this up at a church rummage sale back in high school, about 15 years after this toy was sold to its original owner. It’s missing an action figure (it comfortably sits one) and the rip cord, but it looks awesome on my toy shelf.

I really wished that they had made some of the original characters in the Tron: Legacy toy line that was out last year. The new action figures are the right size and detail level to look awesome piloting this light cycle.

So who had the red/orange light cycle in the orginal movie?

That would be Ram, one of the programs that was allied with Clu and Tron in the original movie who was derezzed (killed). Ram’s programmer Roy Kleinberg is still alive in the Tron real-world universe, and was behind the “Flynn Lives” hoopla early in Tron Legacy.