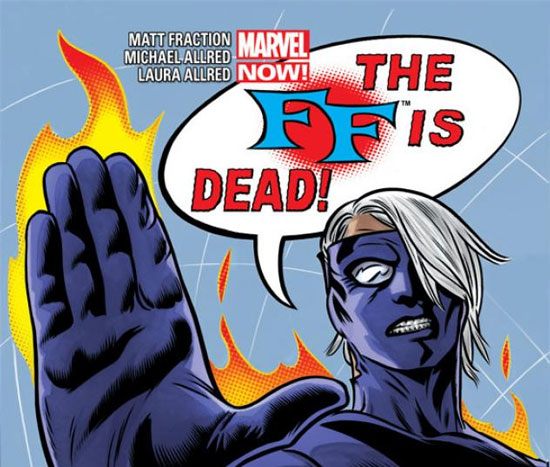 I’ve gotten through so much of my to read pile that I actually get to blog about something in the recent past! FF #3 continues the fun look at the other Fantastic team in the Marvel Universe.

There is a lot of stuff going on in this issue. Darla Deering is still very uneasy about  being the super hero Miss Thing, let along being an active reserve member of the Fantastic Four and babysitting the Future Foundation. It’s also becoming more clear to her that Scott Lang (Ant Man) has a crush on her. He keeps sending her flowers and has shrunken himself to his ant size to judge her reaction. Before he can find out, the Yancy Street Gang take it upon themselves to throw pies at her. it’s their goal to torment the poor Thing, and since he’s elsewhere occupied she will have to do.

The team and the Future Foundation are still trying to deal with the Johnny Storm from the future. He’s traveled back in time to prevent a future alliance between Kang the Conqueror, Doctor Doom and Annihilus. They still don’t exactly believe him, but are a little less hesitant when Wyatt Wingfoot tells them that he believes that this is the really Johnny. This one was able to answer a question that only the two of them would know.

At this Johnny’s urging, the team is getting ready to find out how to deal with this newest threat. There’s also something going on with the Moloids in the Future Foundation as they go visit Mole Man. The issue ends with Scott and Darla celebrating New Year’s Eve in Times Square.

This is really what comics should be. Matt Fraction’s story is complex but lighthearted at the same time. The art team of Mike and Laura Allred is superb. This is one of the best books out there and I can’t wait to fill in the rest of the issues I’ve missed.