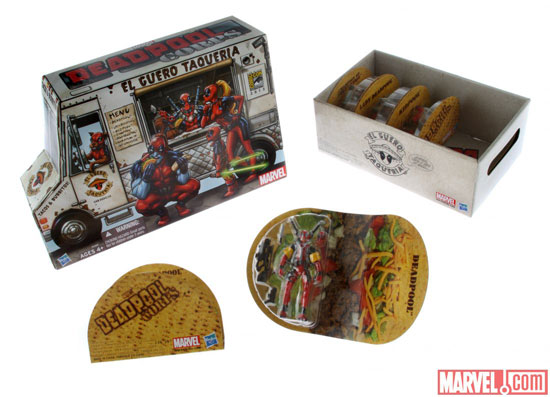 It’s no secret that Deadpool loves tacos and has found kindred spirits around the multiverse in the Deadpool Corps. To celebrate the Mexican delicacy and the friendship that has been found across the multiverse, Hasbro has put together a Deadpool Corps exclusive set for San Diego Comic Con this summer.

So who do you get in this package?

From left to right: Kidpool, Championpool, Squirrelpool, Deadpool, Lady Deadpool and Dogpool. Sadly, Headpool (the talking and disembodied head of Deadpool from the Marvel Zombies Universe) is not included.

The exclusive set is priced at $49.95 and will be available at SDCC. If there are any leftovers, Hasbro usually sells them at their online toy store.

I loved Marvel’s Transformers back in the day. Then again, I loved anything Transformers related. Anyway, you can imagine the sheer sadness of when I found out that the eightieth issue would be the end of the series in 1991. It was enough to make an almost ten-year old version weep just as much as the five-year old version did when I saw The Fox and the Hound for the first time.

Fast forward ten years later, and it was the great 1980s nostalgia boom where all of these smaller comics publishers were putting out new material based on toys. I really dug Devil’s Due because it tied into the previous continuity. Unfortunately, none of the subsequent Transformers relaunches did.

Transformers #80.5 picks up where writer Simon Furman and artist Andrew Wildman left off almost twenty years ago. They do a great job going over what had happened in the last series and set up a new direction.

It’s many years later, and Cybertron is mostly peaceful under the governance of Optimus Prime and the rest of the Autobots (and a bunch of Decepticons who have put aside their old grudges). Unfortunately, there is a growing separatist movement among the Transformers. This peace is short-lived; a group of Decepticons led by Soundwave destroy the Last Autobot–a symbolic act destroying the symbol of peace.

This may have been a short story, but I wound up enjoying this more than any other Transformers book I’ve read in years. Nostalgia be damned, Furman still knows how to write epic Transformers stories and Wildman’s art is still great. It looks exceptionally awesome with the modern style of coloring.

Hasbro has some really cool GI Joe exclusives for Comic Con as well. Following up with last year’s Starscream/Cobra Commander team up, the toy company has some more fun stuff uniting Cobra with the Decepticons.

They are offering a modified Cobra H.I.S.S.–basically a souped up attack tank–that uses a plasma cannon as its main weapon. And that plasma cannon happens to be none other than the evil Shockwave in his non robot form. The vehicle is decorated in his color scheme of purple and grays.

The vehicle will come with two 3.75″ figures. It makes sense that Destro would team up with Shockwave, as they are the second-in-commands of their respective organizations. It also comes with one of Cobra’s robot B.A.T. soldiers. While neon green and purple might not be the best color choices for the battle field, these colors pay homage to the Constructicons. If it works for a gang of construction vehicles that turn into the menacing Devastator, its good for Cobra’s disposable soldiers.

What also is really amazing about this set is that it comes with Energon cubes (scientifically speaking, food for Transformers) and a scaled down Soundwave in his cassette player/boombox form. I’m really hoping that Hasbro has this available for purchase after San Diego.

Hasbro will also be selling two versions of GI Joe’s lady ninja Jinx, one in her traditional red look and the other in her GI Joe Retribution look. 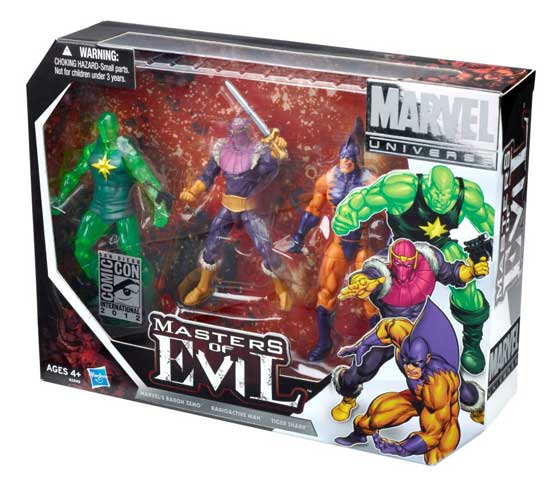 It’s summertime and that means visions of San Diego Comic Con exclusives will be dancing in my head. Hasbro has a bunch of great stuff this year, mainly the Marvel Universe three pack of the Masters of Evil! Lead by Baron Zemo, the team is usually a group of whatever super villains that he can find available. This set features Zemo with Radioactive Man and Tiger Shark.

For me this is a must buy, since I’m a huge Namor fan. Really, when else will they make someone implicitly for the Sub-Mariner to fight? Not to mention, the translucent Radioactive Man is pretty sweet. 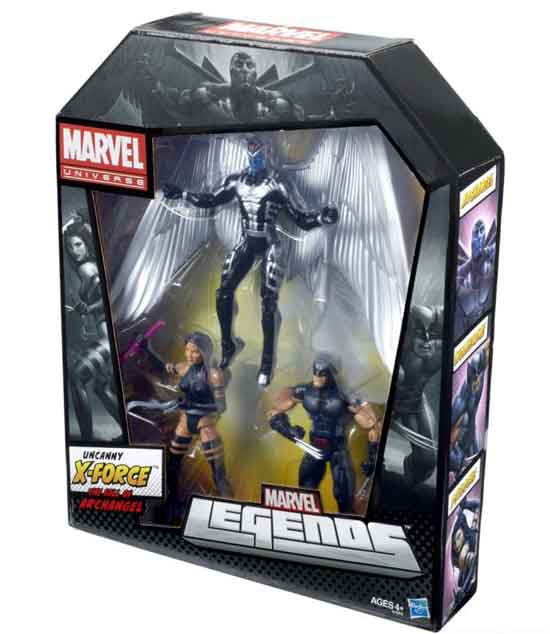 Marvel Legends fans can get a special three pack featuring Psylocke, Archangel and Wolverine in their grey combat gear from Uncanny X-Force comics. This is kind of passable for me, since I already have Marvel Legends of the characters featured.

The biggest thing–pun intended–Hasbro is offering is a four-foot long SHIELD Helicarrier! It’s a whole foot longer than the regular retail version. I think it also comes with an exclusive Maria Hill figure. As much as I would love to have this, I think I’m going to have to pass. If it’s going for $129.99, can only imagine what the shipping would be. But if one of my loving readers would like to gift this to me, I would be pretty grateful… 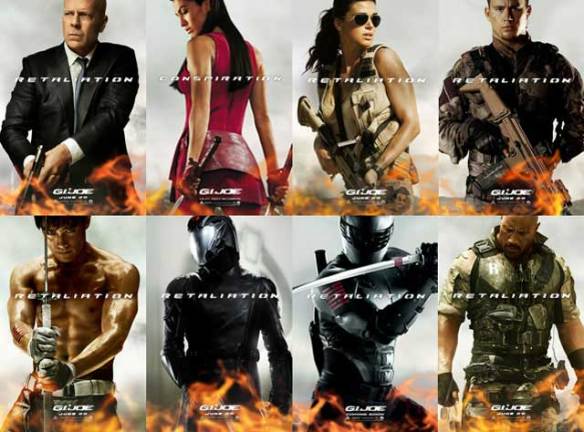 This week it was announced that the next installment in Hasbro/Paramount’s GI Joe saga, GI Joe Retaliation, will be pushed back from its release date of June 29 to March 2013. Why would they do that, being that they’ve started the marketing push for the film.

I don’t know, but there are various rumors floating around. The party line has been that they needed more time to properly convert the film into 3D. Certainly the success of the Avengers reminds us that there is a boat load of money up for grabs.For me that’s a valid enough excuse.

There’s also a rumor floating around that Hasbro/Paramount wasn’t very happy with the poor reception of Battleship (a film adaptation that I still shake my head at) and somehow this is in response to it. I don’t buy that at all. Battleship was doomed from the start, as it was a very hard sell. Retaliation on the other hand is a property that already has a large audience, and the fact that this sequel looked so much better than the original just from comparing the trailers alone, this seemed like a can’t miss.

Even look at the movie schedule. Retaliation would have had a strong opening weekend and week. The biggest movie the previous weekend will probably be Brave, which I assume would skew a more family audience. The next similar film is Amazing Spider-Man, which comes out the next week. That could draw some of the Retaliation audience, but with it being released for the Fourth of July midweek, there’s more than enough moviegoers for every one.

Then there’s the ever crazy rumor that they are re-shooting scenes and weren’t happy with the results of the original film. I don’t know about that.

The rescheduling of this film also is going to throw off next year’s Wrestlemania. The Rock is scheduled to be at that event, so he’s going to have to promote both the biggest WWE show of the year and a new movie release. Eep.

I guess I’ll have to watch the original GI Joe cartoon movie instead.

So the 2011 New York Comic Con has come and gone. I made the trek up this past Friday and Saturday. I certainly had a much better time then last year’s. Not that I didn’t enjoy myself last year, but I just wasn’t having it.

There are a bunch of pics, purchases, sketches and such that I’d love to talk about, but I’m really pooped. So I’ll just leave you with this.

Jem is totally outrageous. In hindsight, I really should have gotten my picture taken with her. Picture by Edward Liu (www.flickr.com/edwick)

One of the weirder things that I found myself intrigued with is Jem. After stumbling across the cartoon this summer on the Hub, I’ve become totally smitten with this totally outrageous character. Seriously.

I’ve wound up staying waaaaaaaaaaaaaaaaaaaaaaay past my bedtime to watch the show because it is surreal. Anyway, they had a display case of vintage toys and marketing stuff. I wonder if there will be some new Jem stuff in the future. Or, at the very least, a re-release of the cartoons on DVD, so I won’t have to leave my girlfriend’s DVR filled with it.

So I’m going to leave you with this.

We can make a difference.

So who needs a mercenary? Red Skull will always recommend Crossbones. The figure from the new Captain America line is pretty bad ass. He doesn’t have his more super villainy look from the 1990s, but the more military accurate style from the 2000s.

Just looking at Crossbones, he intimidating. He’s slightly taller then the rest of the Marvel Universe figures and you can tell by his ammo-filled flak jacket that he means serious business. I also like this realistic depiction of Crossbones, as he looks like a villain that would be found in the GI Joe world.

Crossbones is certainly not going to take any crap and do what he wants to do. He’s probably the toughest action figure on my shelf right now.

So why has Crossbones turned to a life of villainy and violence? To support his true love–DJing.

Okay, so I made this last part up. But it makes sense. Why would he have such a high risk, high reward field of employment? So he can buy the best equipment. It makes perfect sense.

So lets talk about new Captain America figures from Hasbro that have out on the shelves and start off with Cap’s arch-enemy Red Skull. He’s wearing a military uniform, which makes him look cool in both World War II and more modern setting. Flat out he looks like an evil dude.

Weapons wise, Red Skull comes with a comically oversized missile launcher, which makes sense. Not only is he evil, he’s also a brilliant weapons manufacturer. Unfortunately, this really doesn’t fit in his hands all that well, so he will leave this in his villainous office lair.

The super cool accessory that he comes with is the reality warping Cosmic Cube that has been his most sought after object since the 1960s. Now if we could get an Ultimate Nullifier, my life would be complete.

On my toy shelf, Red Skull spends a lot of time hanging out with his favorite henchman/hitman Crossbones. He’s the hired muscle in the Red Skull’s world. Here they’ve stopped Black Widow, who was snooping on them.