Now this is ridiculously awesome.Back in my childhood, Rokkon and Stonedar were two of my favorite characaters in the whole Masters of the Universe pantheon. And now they’re back…in San Diego Comic Con exclusive form.

These guys came out right at the tail end of the Masters of the Universe line and sadly don’t have much of a lasting impression, but they’re still really cool characters. They are part of a species of rock people called, well, Rock People. They never appeared in the He-Man cartoons properly but did make some appearances in She-Ra.

Rokkon and Stonedar were so much fun to play with. The original figures transformed between a humanoid form and an asteroid . The sculpting–for 1986 standards–was really well done, but sadly the articulation feature made them really fragile.

The 2013 version of the figures solves that. The bodies are the really cool modern version that the Four Horsemen sculpt and it solves the problem of the original figures. Their rocky exterior is clip on plate armor!

I’ve not been collecting the new Masters of the Universe figures, save for Faker and the Sorceress, but I am really tempted to get these…what do you think? 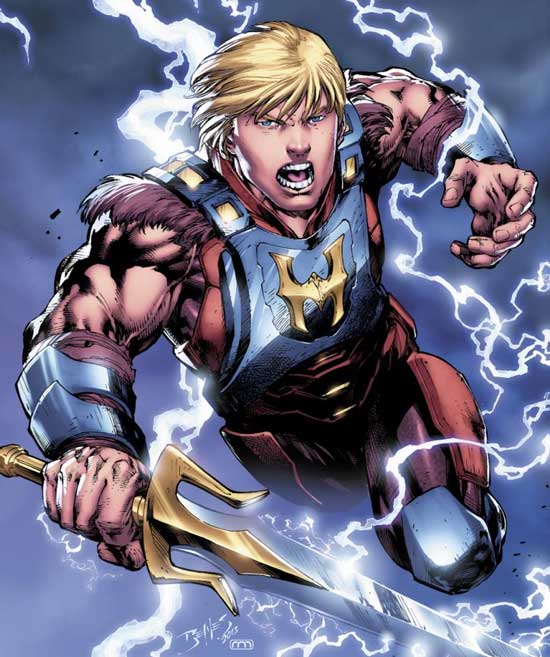 So after about thirty years, He-Man decided that he’s going to do something that the rest of us have to do: wear pants. DC Comics shared his new look on their blog this today.

This is taken from Ed Benes’ cover for He-Man and the Masters of the Universe #4. I’m sure him and the series’ interior artist Pop Mhan (and probably toy maker Mattel) had some input on these new duds. It tones down his barbarian image a lot and has lots of plate armor. The one thing i’m not to keen on this redesign is that it looks like he is still wearing his furry underwear, and the tufts of hair around the shoulders.

So what do you guys think?

Masters of the Universe and the WWE have a lot in common that go beyond both of them having toy lines produced by Mattel. Even Triple H likes He-Man. Over the years, he’s had several He-Man/barbarian themed ring gears for the bigger events. At this past Wrestlemania, he came to the ring by walking out of a large Castle Grayskull-looking stage. After a little poking around wwe.com, you could see that there is some synergy ablaze between the two companies.

They’ve posted a bunch of photos of the Masters and wrestlers teaming up, as well as some short write ups about what would happen if they encountered each other.

But what was really cool is the sections where they have the wrestlers sharing their childhood stories about being He-Fans, whether it be the Miz wishing he was He-Man or Brodus Clay sharing his fondness for the villains. I think my favorite was Sheamus talking about his obsession with getting a Stratos figure.

There’s only one more He-Man/DC battle that I can think of right now; I’m talking about Bizarro fighting Faker. These two have a bunch in common, with them both being evil versions of beloved super heroes.

Bizarro is the opposite version of Superman from an alternate reality where everything is backwards, having the same powers and abilities as Superman. Faker was created by Skeletor to be a duplicate of He-Man. So would this be a repeat of the He-Man/Superman battle?

Well there are a few differences between the two. Bizarro is as smart as a box of rocks. He’s really, really dumb. Faker isn’t as powerful as Superman, but nothing to sneeze at.

So who would win in a fight?

I think I would give Faker the nod, only because he’s not a moron like his opponent. WINNER: Faker. It’s not that difficult to outsmart Bizarro, and that is how he would win the battle of the counterfeits.

Last week we had Superman and He-Man tussle, this week it is He-Man squaring off against Superman’s biggest competitor during the 1940s and 1950s, Captain Marvel. This might be a close battle because the two of them have more in common with each other than you would imagine.

Even though the two of them run around as some of the most powerful people in their respective universes, their true form is a teenager. Prince Adam and Billy Batson both have a catchphrase–“I have the power” and “Shazam!” respectively–which they utter, turning them into demigod like beings. Both Cap and He-Man are near indestructible and super-strong  They both even have talking tiger sidekicks. Everyone knows about Battle Cat, but did you know that Captain Marvel has Tawny, an anthropomorphic tiger.

The only difference between the two is that Captain Marvel can fly and might be a little faster, and He-Man has the Power Sword. But other than that, it’s pretty much even.

So who would win.

Captain Marvel, as he has one trick up his sleeve. He says “shazam”, and in a flurry of lightning changes from the Captain to Billy. So basically all Captain Marvel has to do is lure He-Man close by and keep saying “shazam” to electrocute him. Then when He-Man is incapacitated, back to Captain Marvel and it’s over. WINNER: Captain Marvel 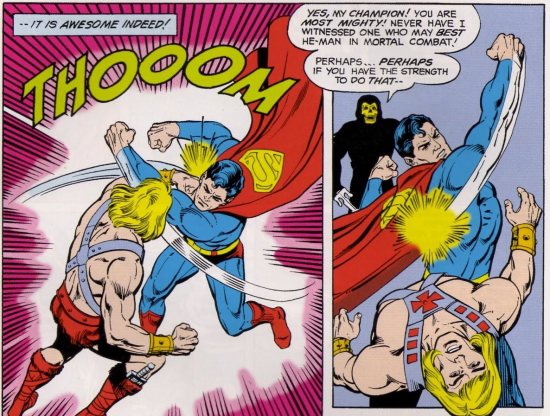 And we’re thankfully back after Superstorm Sandy! More on that later, but tonight’s battle pits two of the strongest beings ever in fandom: Superman and He-Man. The two of them are pretty much the strongest things in their respective universes, so they cancel each other in the battle of strength. Let’s take a look at the rest of the tail of the tape.

WEAPONS:  Superman doesn’t carry weapons. So in that regards, He-Man wins by default. Not only does he always carry that wicked battle-axe and shield, but there’s that pesky Power Sword to deal with. It can deflect energy attacks, is broad enough to swing it like a club and cut through things, cause, you know it’s a sword. Advantage: He-Man

SUPER POWERS:  Superman wins this one hands down. He can fly, enhanced sight and hearing, heat vision and cold breath, and that whole trick everyone with a simple disguise. But He-Man from the original cartoons might be a better disguise artist; all it took was wearing clothes to convince people that he and Prince Adam were two separate people. Advantage: He-Man.

So who would win? This is a pretty evenly matched tussle. I would have to go with Superman, as he’s got way too many tricks in his super powered toolbox to use on the Prince of Power. However, if He-Man can sick Battle Cat on the Kryptonian, that might be enough of a lead in for Superman to get beaten. WINNER:  It’s a draw.

It may have happened a couple of days ago, but I hope you had a great Christmas! Clawful, Skeletor’s lobster henchman, just loves the holidays. He walks around Snake Mountain giving presents to all of his evil warrior pals.

This figure of Clawful is from the early 2000s staction line from NECA. 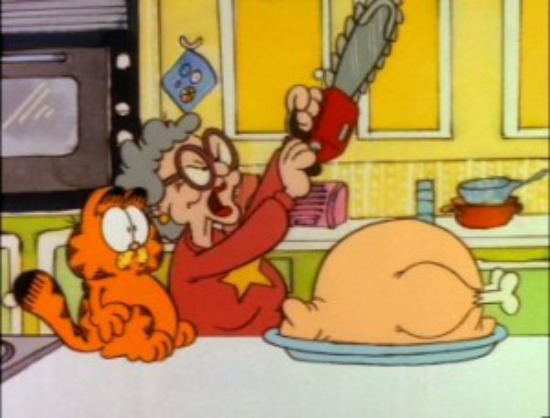 Whether you missed the Thanksgiving parade because you were out partying late last night, busy cooking your thirty pound turkey or had to get ready for tomorrow’s RETAIL ARMAGEDDON 2K11, don’t worry. I’ve scoured the net to find some great clips of Thanksgiving parades of yesterday, with all of your favorite Ridiculously Awesome stars!

We’ll start out with this great clip from New York City’s Macy’s Thanksgiving Day Parade from way back in 1940. About 1:30 into it, the first ever Superman balloon makes his debut. Two years into his existence, the last son of Krypton was already a huge cultural icon.

This clip is from the 1987 Macy’s Parade, which has all kinds of random characters that you would never expect to see in a parade, including White Queen and Luke Cage. Things get really weird when Robocop comes out to make an appearance, and Captain America has to throw the Hulk off the roof! Also, the whole sequence is choreographed to John Williams’ theme from Amazing Stories.

They brought out the Marvel Universe float again in 1989, this time in a really creepy dance number featuring Melba Moore singing “Holding Out For A Hero.” The less said about this the better.

Speaking of Marvel, it seems every year the Spider-Man balloon comes out. Having volunteered at the 2005 Boscov’s Thanksgiving Day Parade in Philadelphia by helping “pilot” a giant sized Pink Panther balloon through Center City, I can vouch for how difficult it really is.

1985 brought us the debut of the He-Man and She-Ra themed Masters of the Universe float. Growing up in the eighties, I can only tell you how awesome this was to a four-year old Chris. “Night of the Valkyries” was never this cool.

The next year, He-Man and company were back, this time with special guest narrator Dolph Lundgren who at the time played the role of our super macho hero in the Masters of the Universe film. Poor Dolph seems to have needed some aquavit to get through this script.

Anyway, I’m off to go play some Mortal Kombat vs. DC! Have a great Thanksgiving!

Good friend Socky of Socky and Jamie fame sent this YouTube clip to me, wondering if it was my collection of He-Man and related Masters of the Universe DVD sets. It’s not but the someone else must’ve been very proud to share their collection with the universe.

So apparently there was a San Diego Comic Con this weekend. Did I miss anything important?

Usually I wind up geeking out in front of the computer, constantly refreshing the web browser to find all the latest gossip. So here’s a recap of SDCC, with what I’m excited about.

So what was your favorite part of SDCC?