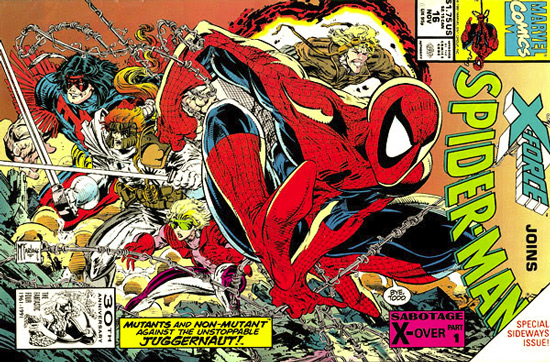 Let’s remember 1991! I just finished reading Spider-Man: Masques, which collects a bunch of issues from the adjective-less Spider-Man book from the Todd McFarlane era. And by judging the art and story in this collection, he’s already got his mind set in the direction he would take with Spawn.

That said, Masques features two stories set in darker, supernatural world. The first one has Spider-Man facing off against Hobgoblin, who is now a demon on a mission from God to rid the world of sinners. The plot gets a little wonky at this point, as Hobgoblin has abducted the son of a woman he murdered. Little Adam believes Hobgoblin is an angel of some sort. Taking a child is enough to get Spider-Man’s attention.

Ghost Rider takes interest in this for two reasons:

Our heroes wind up chasing Hobgoblin all over New York, with the biggest problem being that Ghost Rider is more concerned with killing Hobgoblin than ensuring the boy’s safety. The story ends kind of abruptly with Spider-Man stopping Ghost Rider, who intends on beating the villain to death. The story ends with Spidey giving a lecture on justice not necessarily meaning vengeance, Ghost Rider blowing him off and McFarlane getting to draw two issues worth of chains all over the place.

The second act is Spider-Man donning the old’ black Venom style suit, as he literally goes underground to investigate people disappearing all over Manhattan. It turns out the homeless people living in the subway have been feeding “sinners” to on-again, off-again hero/villain vampire Morbius to quench his bloodthirsty.

Unfortunately, Spidey has to inform him that he’s been fed people who aren’t criminals. Morbius is pretty upset about this revelation; he goes nuts attacking the homeless people and then runs of on his own, presumably to start his new solo series. Again, this is from the early 1990s, so it’s the second height of Marvel’s super natural hero popularity.

These stories really look like they could have been out of Spawn. The backgrounds, the panel layout, even the homeless people who resembled the Vindicator all show up. The ties between Spider-Man and Spawn aesthetically speaking are really strong.

The final story is a crossover with X-Force. You can’t get much more 1990s comic art then this, with both McFarlane and Rob Liefeld teaming up. This comic just might be the birth of “widescreen” comic books, as the art is laid out on the page lengthwise. This is pretty much what you would expect; its sheer visual mayhem.

What you might not expect is the story; longtime mutant terrorists Juggernaut and Black Tom team up some mercenaries in an attack leading to the destruction of the upper half of one of the World Trade Center’s towers. It’s very uncomfortable reading this story in a post 9/11 world, as the background imagery is eerily similar to the actual. I hadn’t read this since college, and completely forgot about this.

Spider-Man: Masques is a nostalgia book, for anyone who grew up reading comics during the 1990s. It sums up everything in comics at that point on the Marvel end: superstar artists, X-Men characters, supernatural plot lines, everything.  It might not hold up that well, but it’s a great look back at that era.