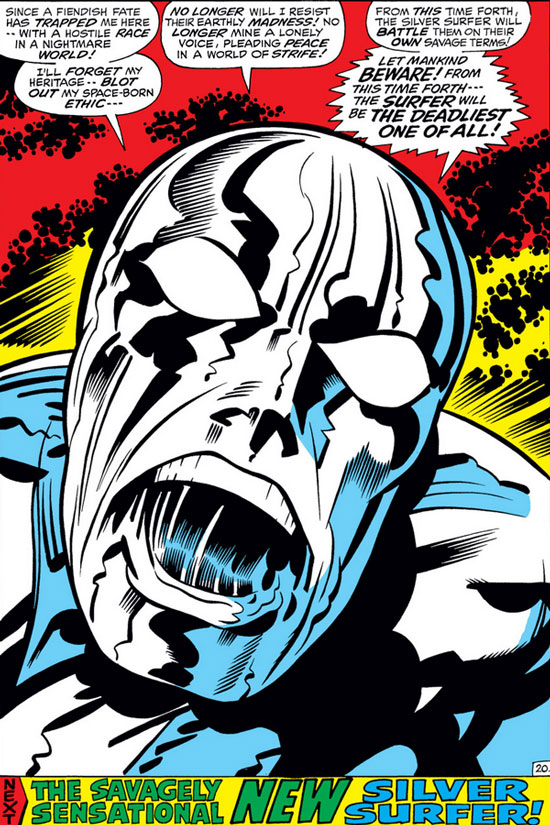 The eighteenth issue of Silver Surfer would be the series’ last and it ends with a bang. The character’s creators Stan Lee and Jack Kirby are reunited in this issue. With a setting of the story being blue side of the moon that the Inhumans call home, Kirby does some amazing work in this issue.

After falling on the moon, Silver Surfer becomes an unwilling pawn in the war between Black Bolt and his evil brother Maximus for control of the Inhumans. After fighting both sides, finally snaps and attacks both sides.

The last page of the issue is the above splash page and it pretty much shows that Silver Surfer has had it with the universe. He’s done with humanity (and it’s Inhuman branch). That image of an irate Silver Surfer is just amazing and I’m so glad I read this series, if just for this.

Sadly, this was the last issue of the series and whatever direction the “savage” Silver Surfer would have taken is pretty much an unknown. This take on the character didn’t spill over into any of the other Marvel series at the time; he would reappear almost a year later in 1971’s Sub-Mariner. 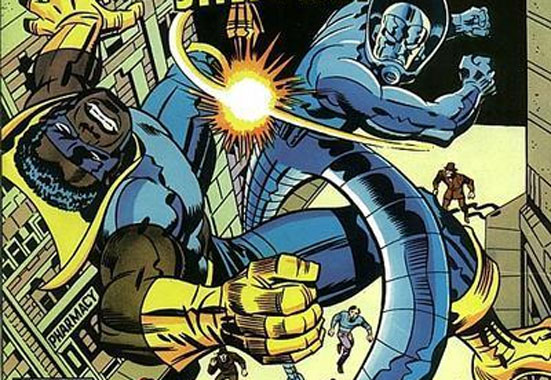 This might seem like a random thing to read. I picked this up at the last New York Comic Con because of the Jack Kirby cover. Sometimes it is acceptable to judge a book buy it’s cover.

As a character, it seems to me that Black Goliath has spent most of his existence flying under the radar. I guess it’s my own lack of knowledge, but I mostly know of him from his death in Civil War. This made me wonder: why is Black Goliath such a forgotten character in the Marvel pantheon? If MODOK can be a top tier character, surely he can as well.

The story is fairly upfront. This issue is a two parter, feeding into the next one. Chris Claremont’s plot is very direct. Tony Stark has lost possession of some sort of gadget but won’t tell Goliath what it is. The giant super hero’s day only gets worse; he teams up with the LAPD to stop Stilt Man, who pretty much kicks his ass. To make things worse this embarrassed in front of his girlfriend Celia. The issue ends with Black Goliath and Celia getting mysteriously teleported away.

I guess now I know why Black Goliath is so forgotten. He’s literally an imitation of the various Hank Pym personas over the years. I guess in his case, his death was his most relevant moment of his existence. 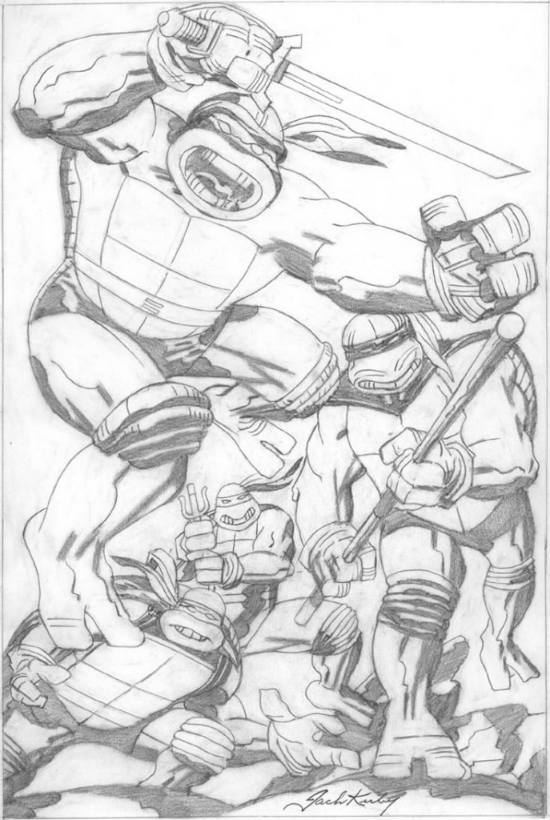 Comics Alliance had this posted in the new Best Art Ever This Week feature and I think I just felt my head explode. How did Jack Kirby wind up drawing the Teenage Mutant Ninja Turtles?

I know that Kevin Eastman and Peter Laird were definitely Kirby fans. In one issue, the Turtles wind up going on an adventure with a Kirby-based stand-in, helping him recover his magic. But this is just amazing. You can read more about it over at the Kirby Museum’s Kirby Dynamics blog. 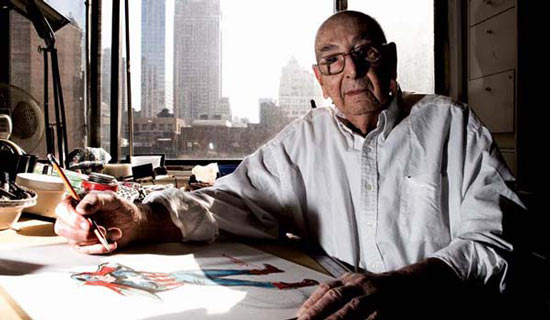 Did you know that yesterday was comic creator Joe Simon’s 98th birthday? This legendary writer/artist/editor is most known for the creation of Captain America with his longtime collaborator Jack Kirby, but that only scratches the surface of his career.

Here are some Joe Simon facts that you may (or may not) know about!

You can learn more about his career and the Gold and Silver Ages of comics in the recently released Joe Simon: My Life in Comics. He will also be appearing at this weekend’s New York Comic Con. 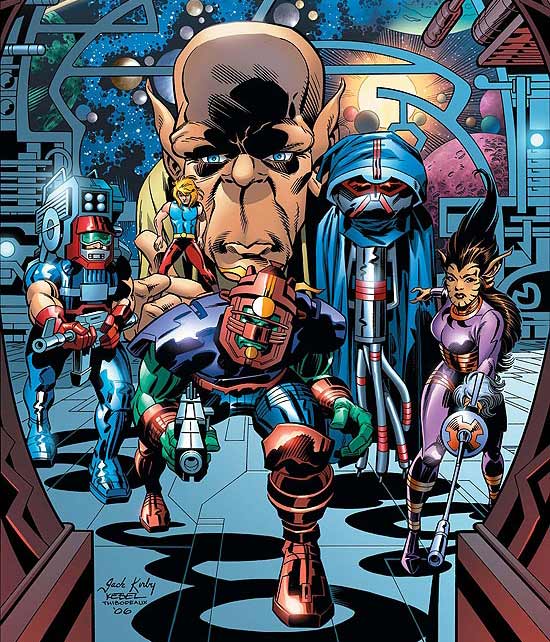 With trades and hardcovers being all the range, and now everything being released in a digital format, there’s no lack of Jack Kirby material to read. So should you give Jack Kirby’s Galactic Bounty Hunters a shot?

The first question you might be asking is what is it? Galactic Bounty Hunters was a miniseries put out by Marvel’s creator-owned imprint Icon in 2006. Makes sense.

So how did the world get a Jack Kirby comic nearly twelve years after his death?

Galactic Bounty Hunters is a completion of one of Jack’s projects that was never finished. His daughter, Lisa, along with Steve Robertson, Mike Thibodeaux and Richard French were able to flesh out the concept and this book is the result.

This is a pretty straight-forward story, about science fiction writer Jack Berkley, whose books chronicle his secret real-life adventures as a space exploring bounty hunter. His life is pretty tame until his son Garrett finds out about his secret past. It’s up to Jack to team up with his old Galactic Bounty Hunter pals, as they go on a cosmic adventure to save his son.

Lisa and Steve are the primary writers of this, adapting the concept and story to comic form. Thibodeaux (a long time Kirby collaborator) handles the art which does a great job mimicing Kirby’s style.

Super fans will also be happy, as Kirby’s Captain Victory and his Galactic Rangers also make an appearance during the minisereis.

This was a fun read; very light in tone. It’s certainly not groundbreaking material by any stretch of the imagination, but I’m glad I picked it up. Galactic Bounty Hunters would definitely make a great concept for a kid’s cartoon or video game series. Hint hint. 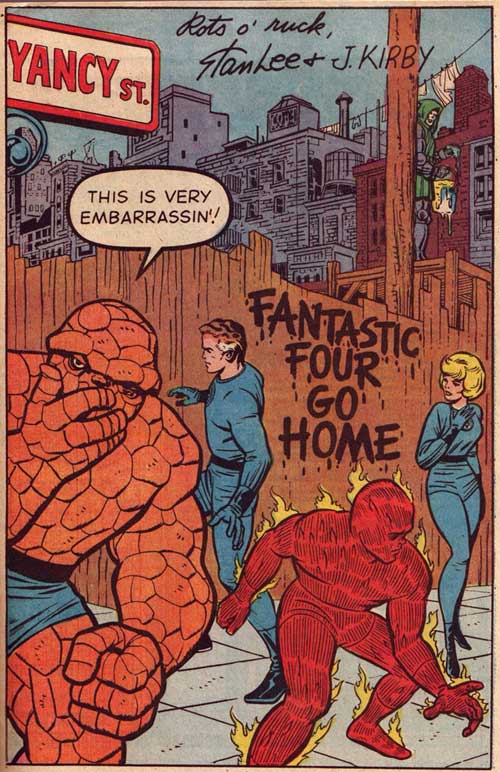 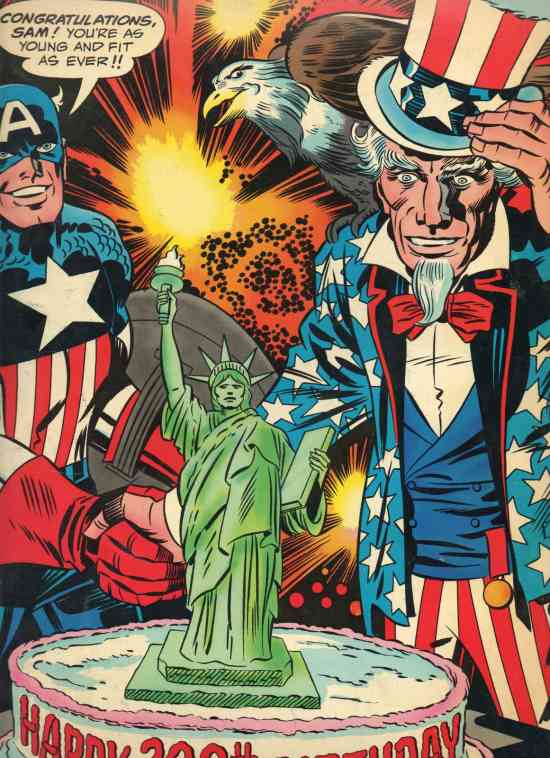 Continuing with all of the Captain America hoopla, we’re going to look at this piece by Jack Kirby. It’s the back page of Captain America’s Bicentennial Battles, which we just talked about the other day. Cap and Uncle Sam are celebrating the bicentennial with a big old cape. This is great 70s Kirby; just look at the Kirby Krackles!

Anyway, It’s record breaking hot here in New Jersey so I’m going to go back in the pool. Everyone have a good night!

So lets talk about some Jack Kirby Captain America stuff from the 1970s. Bicentennial Battles features two stories. Kirby was coming off his run on the Fourth World characters, so this is what you would expect.

The first story is reprinted from an issue of Marvel Treasury, where Cap goes on a journey through American history thanks to the enigmatic Mr. Buda. Along the way, he fights Nazis, helps save the life of a runaway slave during the Civil war, and even influences the creation of the American flag due to a run in with Benjamin Franklin and Betsy Ross. Ultimately Cap realizes that the true spirit of America was the hope for a better tomorrow.

This is pretty much a fun story involving Cap. It’s very silly and weird at times, but Kirby’s art is just superb. The second half of this TPB is issues 201-205, where Captain America and Falcon team up to stop the energy monster Agron the Unliving, as well as other weird aliens, monsters and technology. I wasn’t digging this half so much.

Anyway, the “Bicentennial Battles” story from Marvel Treasury is really good and that warrants a read. 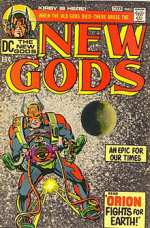