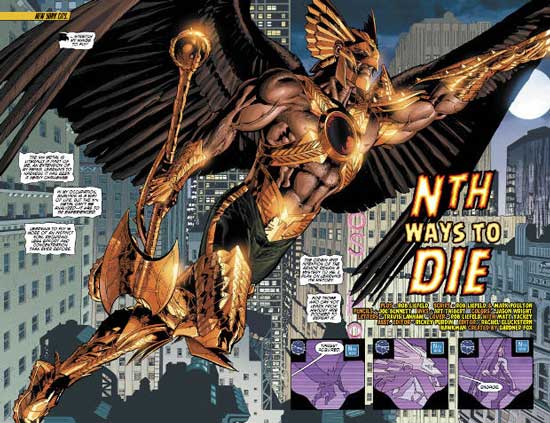 Hawkman is one of those characters that on the surface seems like he could be really fun to read, but unfortunately years (and years) of crazy continuity make it a daunting task. I picked up Hawkman #9 because of Rob Liefeld, but it was the creative team as a whole that made me enjoy the book so much.

Co-written by Mark Poulton, it starts off a new story arc for Hawkman. As someone who really isn’t up on the character, it was pretty straightforward to get into. Carter Hall has the magical Nth metal armor, except this version has it originating from inside him like the Guyver. Possessing such a weapon makes him quite the target, as he keeps getting harassed by mercenaries trying to forcibly remove his armor. The issue ends with Carter speaking with Emma, a female friend and colleague of his. This wraps up rather quickly as they get attacked; Carter is kidnapped by an “antiquities”/weapons dealer who wants the armor named Xerxes.

The art on this book is by Joe Bennet is pretty sweet; I always seem to forget about him and his projects. This was a quick but fun read. I’ll probably finish the arc at some point later on.