Move over Rudolph! There’s something else to get you glued to your television (or YouTube viewer of choice) with the latest trailer for Man of Steel. So what did you think?

Well for one, it makes me feel old. Seeing Kevin Costner and Russel Crowe cast as Superman’s respective human and Kryptonian fathers is a little alarming. I remember it wasn’t too long ago when both of them were always on the top of Hollywood’s most beautiful celebrity lists. And now they’re old enough to play old parents. Eep. But anyway, I like the look Zack Snyder picked for the film. I just hope the final film is more about what it’s like being Superman than Superman fighting everything in his path.

Big Blue is back!

San Diego Comic Con attendees were able to pick up a poster to promote Zack Snyder’s Superman movie reboot Man of Steel last week. Not only that, but Snyder announced that there was going to be a teaser trailer attached to The Dark Knight Rises.

Superman’s last big screen adventure was in 2006’s Superman Returns, which was a frustrating affair. I do give credit for director Bryan Singer trying to tie it in with the previous films. The result was unfortunate; the film was glacially paced (no pun intended, even though much of the film took place in the Fortress of Solitude).

Snyder’s over-the-top style will make for a make for a fun film. You can follow the production over at http://www.manofsteel.com. Man of Steel hit the big screen on June 14, 2013. 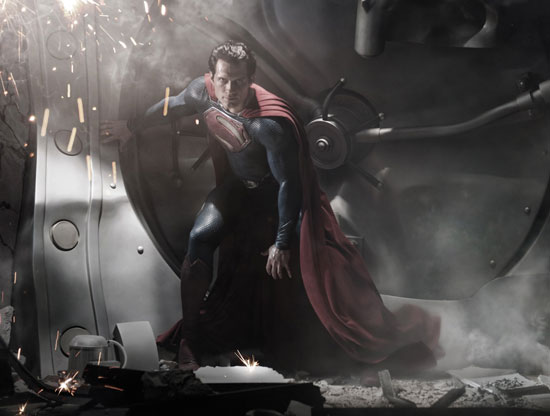 We may still be two years away from its debut, but I’m starting to get excited about the relaunch of the Superman film series. Today the good folks at Warner Brothers released an image of Henry Cavill as Superman, and I will say that it looks pretty cool. I do wish they had cast Jon Hamm as the Man of Steel instead. But, again, I’m not a Hollywood bigwig.

What excites me most about this film is that Zack Snyder is directing. I enjoyed his adaptations of 300 and Watchmen. He knows how to translate comics from the floppy to the big screen. I also like that they’ve cast Laurence Fishbourne as Daily Planet editor Perry White.

So what do you think of Man of Steel?