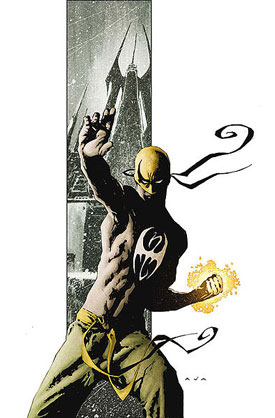 You know what I like doing? I like hording runs of complete (or near complete) series and then binge read them, kind of like how someone will burn through a whole season of something on Netflix. With Marvel Unlimited, I was able to binge read the entire Immortal Iron Fist series.

I must admit that I don’t necessarily know everything about the character. But in this short series, which ran roughly two and a half years, I was able to jump right in at full speed.

There is a lot that happens in this series, ranging from Daniel Rand having to literally fight off corporate raiders that are part Hydra, to fighting with the other immortal weapons in a tournament of celestial proportions, to finally even going to hell. All the while, there are side bars chronicling the life and death of Orson Randall (the previous Iron Fist), Daniel’s father Wendell taking the Rand family on an expedition to find K’un-L’un, and single issue stories about the various other people to wield the Iron Fist. We even explore Daniel’s personal life, whether it be how he runs his business or his relationship with Misty Knight.

The resulting series works so well, whether it be written by the series’ original team of Ed Brubaker and Matt Fraction, to the later issues by Duane Swierczynski. It is a real testament to his abilities as a writer, as he keeps the tone and pace set by Brubaker and Fraction. On the art side, the series went back and forth from David Aja and Travel Foreman seamlessly. The resulting series was just great.