You just know any comic book that starts out with the Silver Surfer shopping for a trench coat and fedora is just going to end badly for him. By the middle of this issue he finds out that the Fantastic Four–who he thought were his friends–have been conspiring against him with the US Army.

But first, back to him clothes shopping. Surfer is offered them, as the salesman thinks he is holding up the store which is called “Exclusive Styles Men’s Clothing.” With a name like that it has to be fancy. Surfer won’t accept his generosity. Instead, he turns a stanchion into solid gold. He then doe what we all do with our new clothes: goes out on the town.

Unfortunately he overhears what sounds like the Fantastic Four teaming up with the army. Fearing captivity he lashes out and attacks them. It leads to a high speed, energy blasting battle with the Human Torch across the city that ends abruptly with the Torch almost getting hit by a train. Surfer snaps out of his rage in time to prevent that from happening, as he couldn’t stomach the thought of him letting a friend die in such a grizzly way.

The story ends with Surfer finding out the truth of the army’s visit to Reed Richards: they wanted to recruit him to help assist in the development of space travel. Surfer leaves completely distraught, having blown the one opportunity that mankind wanted to befriend him. 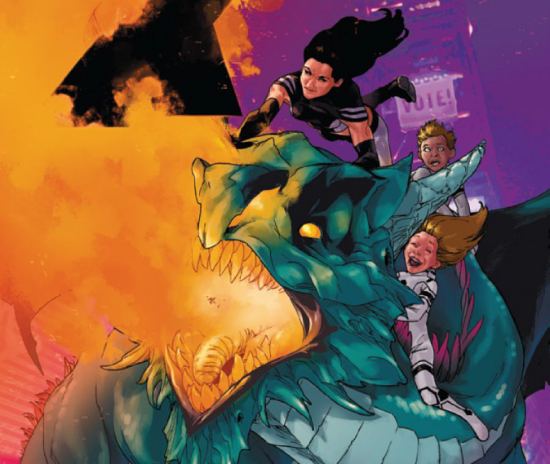 The Adventures In Baby Sitting storyline continues in this issue with X-23 having to save Val and Franklin Richards from the large dinosaur from last year. Turns out not only is it a large dinosaur, but it’s a fire-breathing dragon flying through Manhattan. This is turning out to be the worst babysitting job ever.

X-23 and the Franklin kids are able to stop the dragon, with a little help from Hellion (who seems to be a little upset with how the awkward conversation from last issue). Because this story arc isn’t done yet, things can’t be so simple. The four of them are transported to  a planet of junk.

So who’s behind this? Alien super collector the Collector, and he’s no longer as silly looking as he is pictured to the left. He wants the admantium claws and some DNA samples from X-23, who obviously doesn’t want to share them; it would kill her. Things get more complicated as she and Hellion have to figure out how to escape, as well as figure out how to save the Franklins.

There’s a great cut too Mister Fantastic and Invisible Woman, who are wondering how their children are dealing with their new babysitter. Not that they think that X-23 is a problem, but more so that their super smart children are more than a handful.

I don’t want to be a complainer, but the pacing in this issue was really quick and it didn’t take that long at all to read. I like my comics a little more meatier, but I was still happy with this one.

Today, like millions of others across the United States, I’m heading out to my local polling station for Election Day. What if super heroes could Let’s look at the political leanings of our favorite super heroes. Information about the labels used in this article are courtesy of the Pew Institute’s political typology study.

We’ll start our examination with Superman, the first super hero. Ultimately, he’s guided by what he feels is right and wrong, so I think he would be extremely moderate when it comes to the ballot. He always wants to do the right thing, so I can see him reading and making charts comparing the candidates. The main factor in his decision is if it is the right thing to do.

Batman is firmly on the conservative side of the political spectrum. His advanced interrogation techniques, warrant-less investigations and physicality would drive the ACLU nuts! Not to mention the fact that he likes spying on people for no reason (the whole Brother Eye story) and secretly collecting databases on his friends’ weaknesses (in case he ever has to, well, kill them), Batman is a firm believer in national security over personal rights. When he takes the mask off, Bruce Wayne is a billionaire industrialist, so obviously he would be pro-business. Not to mention that he inherited everything through investments, so I would imagine he’s happy with the way the capital gains taxes are as is.

Captain America is the ultimate populist hero, so like Superman, he would be a moderate independent. He would never publicly endorse a candidate. Cap feels that feels that he is the self-appointed guardian of the American dream, so he would vote against anyone who threatened that. At times he might skew a little liberal economically; he’s a product of the New Deal you know! Captain America is also a strong advocate in civil liberties, as his defense of them was a big part of the Civil War event. For more insight into his political beliefs, look no further than Captain America #250, where he mulls running for president.

If you’re looking for a super progressive/liberal type super hero, look no further than Mr. Fantastic. One of the–if not the–world’s foremost scientists, he would absolutely go nuts listening to someone argue why creationism must be included in education. In the current Future Foundation book, he’s empowered a global task force of the world’s greatest minds to fix problems before they get out of hand. He’s an advocate of being a world citizen and thinking globally.

His Fantastic Four teammate the Thing is a bit more conservative than him. Thing takes pride in being a self-made man. What would annoy a 500 pound rock monster of a man? High taxes and ridiculous government spending. You try explaining to him why his tax dollars are needed to build a bridge to nowhere!

So what would everyone’s favorite Green Lantern political type be? Obviously Hal Jordan is too busy with his super hero business and personal life to vote. I would bet money that he probably isn’t even registered to vote. Well, he was registered to vote at one point, but that was probably so he could hit on some girl who worked in the city election office. At least that’s what post Green Lantern: Reborn wants us to think.

is a well-known super liberal super hero. He is a strong advocate for pretty much all of the traditional liberal causes (just remember the Hard Traveling Heroes stories if you don’t believe me).  If he were a real person, he would probably pal around with other progressive billionaires like George Soros and Warren Buffet.

Hawkman is Green Arrow’s longtime political counterpoint in the Justice League. This winged super hero has been portrayed as being a super conservative over the years. He proudly supports the death penalty, is socially conservative and believes that people themselves are accountable for their personal success. No soup for you unless you work for it! 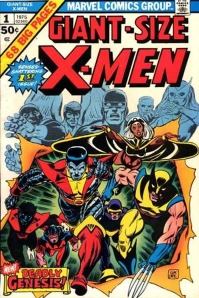 I think that it is universally accepted that Professor X is a card-carrying liberal. He’s a civil rights icon and a strong advocate against discrimination. He would be the first in line to stand up for Affirmative Action.

But Charles Xavier can never run for office, and it’s not because he’s a mutant. It’s because of his immigration scandal. You know the one I’m talking about; look to the right.He brought Colossus, Storm and Nightcrawler into the country 36 years ago with student visas–and they’re still here! Plus, bringing a known criminal illegally into the country in Wolverine?

Lex Luthor seems to skew towards being a staunch conservative. I’m not saying that staunch conservatives are super villains; just look at the facts. Aside from wanting to get rid of Superman and occasional thoughts of world domination, Luthor has been one hell of a business man. The DCU is dominated by LexCorp and its various subsidiaries, and as its owner/CEO, Lex would totally support any candidate who championed less government regulation over the business and finance sectors.

So what kind of political views would the Punisher have? Anarchistic tendencies aside, its anyone’s guess. He would agree to a certain extent with libertarians that the government is too large and ineffective, and that people should have more control over their lives. That works for him; he thinks the legal system is corrupt and spends his days hunting down criminals. Plus they don’t believe in gun control, and the right to carry a concealed Uzi or M-16 is something that is near and dear to his heart. But as soon as they start saying that things like drugs and prostitution shouldn’t considered crimes anymore, you lose him.

Spider-Man’s whole “with great power comes great responsibility” mantra leads me to believe that he would be pretty mad about the country’s current financial boondoggle. Spidey would agree with the Occupy Wall Street crowd’s view that many big businesses have been abusing their financial power. He would probably skew liberal on many social issues, especially education. As a product of New York’s public schools, and later a teacher there, he sees the importance of having a well run public school system.

Iron Man’s family has made its fortune

as a military contractor and through inheritance and investment. Fiscally and defense, he is very conservative. But in some ways, he’s also very liberal. The employees at Stark Enterprises are treated extremely well. He’s a big supporter of global welfare and the environment, even if it’s against his business interests. Plus, championing the Super Hero Registration Act to create a new government agency to administer super heroes nationwide only gives the federal government more power. I don’t think you can pigeonhole Tony Stark to a certain ideology.