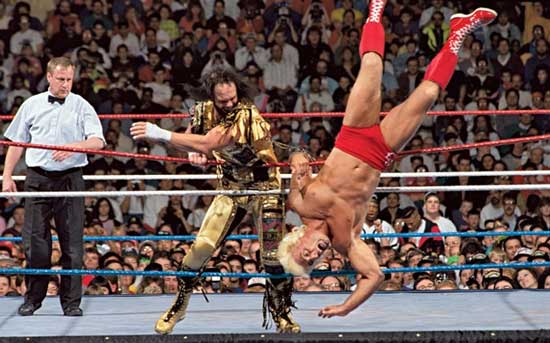 WrestleMania VIII was an interesting show. There were a few really cool matches, and a really confusing ending. What happened?

THE GOOD: Randy Savage had a great match with Ric Flair for the WWF Championship. Flair was talking trash about Savage’s wife, Miss Elizabeth, which set up this feud. Flair was being so scummy towards her the whole time, so you really REALLY wanted him to not only beat the tar out of Flair but take away the title. And he did. Another awesome WrestleMania moment from Savage.

THE BAD: The ending of the Hulk Hogan/Sid Justice match. Sid was so awesome, and Hogan wound up costing him the Royal Rumble, which made him go crazy. Rightfully. I was so sure that Sid would end Hulkamania once and for all. Unfortunately, the next day I found out at school that Hogan one and never got around to seeing this match. I just saw this for the first time this month and it is confusing. There’s a lot of confusion, Papa Shongo and the Ultimate Warrior get involved. Just craziness.

MATCH TO WATCH: Bret Hart beating Roddy Piper to win the Intercontinental Championship is the highlight of the event, if not the best match I’ve ever seen Piper in.