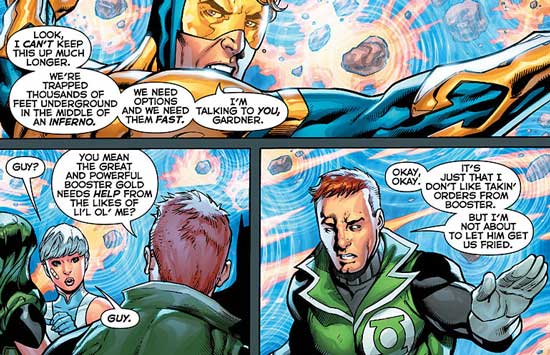 Dan Jurgens and Aaron Lopresti’s Justice League International #5 finishes their first story arc without a bang, and I mean that in a literal sense since the JLI was able to put aside their individual pettiness and stopped alien invader Perraxus from destroying the Earth.

Along the way there’s lots of arguing, in fighting and a whole lot of self doubting on the part of Godiva, but they survive. The book ends with a panel showing the JLI surviving on a television monitor, with someone saying that they’ll have to go to their fallback plan on killing the heroes.

What I do like about this book is Jurgens’ take on the characters. None of them are impressed or in awe of Batman, which is an overdone cliché in a lot of super hero team comics. They treat him just like any other hero. I also like the relationship between Booster Gold and Guy Gardner; Guy is always antagonizing Booster (who isn’t as inept as the original JLI).If I could change the book, I would probably make the team a little smaller just to allow more characterization and depth. At time it seems like Fire and Vixen are just there. Anyway, this first arc was pretty solid and I wonder where they’re taking this “kill the JLI” subplot.