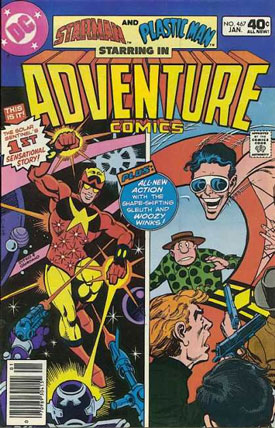 Adventure Comics was a long running anthology series from DC. Issues #467-469 caught my attention due one of the features being the debut of the Prince Gavyn incarnation of Starman. I was drawn to this not because of the character, but more because it was Steve Ditko work from the 1980s.

After reading the Steve Ditko book, I’ve had a lot of interest in this period of his career which is very hit or miss. But in these issues, Ditko was on fire. The script is by Paul Levitz, who wrote a lot of DC’s more cosmic stories during this period.

Gavyn is a prince from the intergalactic empire of Throneworld, and after developing powers he was exiled into deep space while his evil and corrupt sister ascends to the throne. As Starman, he comes back to try to liberate his people. It’s what you would expect from a science fiction/fantasy/super hero comic book from this time. One cool thing about the story is that Starman’s origin isn’t explained till the third appearance of the character. I liked that because you already had a sense about him before that was all explained.

And, I guess another reason why I really wanted to pick these up was because of the Gavyn figure I have from the Justice League Unlimited line that Mattel put out during the mid 2000s. I felt obligated to learn a little more about a character that I wasn’t familiar with.

The other stories in these issues feature Plastic Man, which are pretty silly and kid friendly. I think that’s because this would be the time that the character was horrifying a generation of children on a Saturday morning cartoon show.