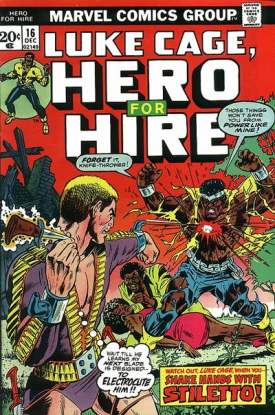 It’s a bad day for Luke Cage in Luke Cage, Hero For Hire. Issue #16 starts Cage fighting Shades and Comanche, two thugs who know his checkered patch. And why are they named that? Because they respectively dress like a stereotypical Native American and wear sunglasses.

Cage has to begrudgingly help out these two criminals, as they can help him clear his girlfriend who has been charged with murder and is kidnapped by the real murderer. And he also has to stop this blade wielding, v-necked outfit wearing bounty hunter named Stilleto, who wants to put him back in jail. What plagues this story is that there is so much stuff going on.

The ending literally comes to a crash, with the real murderer getting hit by a car, Cage’s girlfriend getting charges dropped, and Shades and Comanche not only going back to jail but not blowing Cage’s cover, since he saved them from Stilleto. They wind up going back to jail but are perfectly cool with that. And the issue ends teasing a brawl with Iron Man in the next issue.

Simply put, there was just way too much stuff going on in this issue. What I did like was the art by the late Billy Graham. I’m not talking about the televangelist or the self-proclaimed “superstar” of WWF fame.

Doctor Who and Dalek stand-ins? Kung fu? Disco inspired fashion and “Macho Man” albums? Welcome to the wonderful world of Power Man and Iron Fist. Issue #79 is a trip back to the seventies, even though it was published in 1982.

The “Heroes for Hire” are visiting their martial artist-turned-Broadway actor pal Robert Diamond, who is starring as Professor J.A. Gamble in a production of Day of the Dedlox, pretty much a Doctor Who knock off with Dalek like robots called Dedlox. The issue’s writer Mary Jo Duffy must have really been on a Doctor Who kick at the time.

Anyway, everything is going well until the Dedlox activate and start rampaging the city. Things get even weirder when Iron Fist and Power Man come across the real-life  Professor Gamble, an intergalactic traveller who travels around in an inter-dimensional book store (a lot like a certain doctor’s telephone booth inspired Tardis) fighting Dedlox. Apparently at some point the Professor wrote a play based on his life and left it on Earth. The Dedlox discovered Diamond’s production of it, and used it as a cover way to attempt to gain control of the planet.

Just as mysteriously as he appears, the real Professor Gamble
disappears after he helps Power Man and Iron Fist defeat the Dedlox. Gamble made some other appearances in Marvel comics later on, but I’m sure none were as weird as this.

Speaking of weird, there was a really odd scene  in this story. Iron Fist is over his girlfriend Misty Knight’s apartment getting ready to get, um, frisky, when they are kicked out by Luke Cage and his girlfriend Harmony (Misty’s roommate), who planned on using the apartment for that same reason. It just read straight out of a sitcom, even getting down to the fact that Fist and Cage are best friends, and dating two women who just happen to be roommates. The scene ends like something out of a sitcom from that period, with the heroes running out and Misty asking Harmony if she knows how to play gin rummy. Classic.