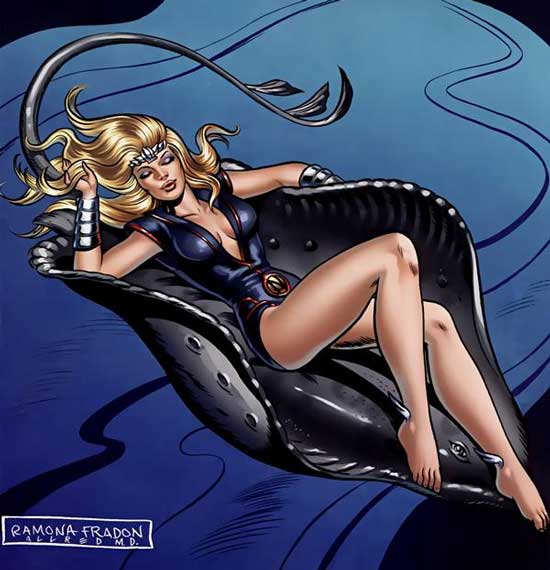 This was the perfect book to pull from a dollar bin at a comic show (I might have even paid less for it, I don’t remember). Namora #1 is a single-issue story by Jeff Parker (who has had some experience writing the character during the Agents of ATLAS series) with art by Sara Pichelli before her Ultimate Spider-Man breakthrough.

Namora is Namor’s half-human cousin and a general nice person. The story begins with her rescuing some Russian sailors from a kraken, only to find out that the sea monster has a peaceful coexistence with a colony of lost Atlanteans. Unfortunately Namora realizes that everything is not what it seems as she has a conversation with her deceased daughter Namorita (who was killed back at the start of Civil War). Ultimately it’s up to the Atlantean princess to save her people from the sea monster.

The resulting issue is a lot of fun. It’s a complete story and everything is resolved by the end. It comes across kind of like a pitch, like Marvel was trying to gauge the interest on the character getting her own mini or ongoing series. I enjoyed it, as it was a different take on the Namor/world of Atlantis. So this gets a thumbs up. What also gets a thumbs up is the cool variant cover by legendary lady comic artist Ramona Friden!

So the new Spider-Man featured in Marvel’s Ultimate line seems to have created a bit of controversy. Not for killing Spider-Man, but for his replacement half-black, half-Hispanic teen named Miles Morales who debuts in Ultimate Fallout #4 today. Unfortunately, it’s very hateful.

Instead of it being the “OMG! WHYYYYYYYYYYYYYY!?” in 2005 when DC killed off Blue Beetle (Ted Kord) and replaced him with the younger Hispanic Jamie Reyes, reaction by internet bullies has been very racist. Bleeding Cool has compiled a list of some of the worst comments left on an article about Miles’ debut.

The frustrating part is all this fake outrage. The majority of those commenters probably don’t even read the comics and only know about Spider-Man from his appearances on the big screen and television. If they did, they would know that this isn’t the main version of Spider-Man, but an alternate one.

Just when things started to die down, artist Sara Pichelli’s quote in the United Kingdom’s Daily Mail seems to have further confused people about the new Spidey.

“Maybe sooner or later a black or gay – or both – hero will be considered something absolutely normal.”

Sara said this in a recent article. This was wrongfully misinterpreted that the new character was gay as well.

So now they’re up in arms that Spider-Man is not only black, but gay.

First she never said the character was gay. Secondly, its 2011. People need to be a lot more accepting.

That said, so how did we get to this point?

Another interview with writer Brian Michael Bendis revealed that they had planned on killing off the Ultimate version of Peter for a while. By changing the ethnicity of the new Spider-Man only helps distinguish the two different characters.

Community's Donald Glover tried to use his Twitter followers to help him land the role of Peter Parker in the new Amazing Spider-Man movie. Although he didn't get the part, they made a joke about it in an episode that season.

Community actor Donald Glover played a part in this decision. Glover took to the internet in a unsuccessful bid to play the role of Spider-Man in the upcoming Amazing Spider-Man.

“He looked fantastic!” Bendis recalls. “I saw him in the costume and thought, ‘I would like to read that book.’ So I was glad I was writing that book.”

Bendis also had a bit of a personal interest in the new Spidey’s ethnicity. His two adopted daughters are an African America and an Ethiopian.

“Wouldn’t it be nice for them to have a character or a hero that speaks to them as much as Peter Parker has spoken to so many children?” Bendis says. “There’s nothing wrong with that, and I think we need more of it.”

And that’s the thing. It doesn’t matter what color our heroes are. What is important is that they inspire us to be better people, and this is something that the Miles Morales Spider-Man will do.

Heck, I wanted to grow up to be Roadblock from GI Joe.

Anyway, all this phony outrage just drives me nuts. If this twist in the Spider-Man mythos isn’t for you, then do what your grandmother always told you: if you can’t say anything nice, then say nothing at all.