It’s another spin-off from Red Hood and the Outlaws. Starfire #1 was pretty good, so how did her two former male teammates wind up? 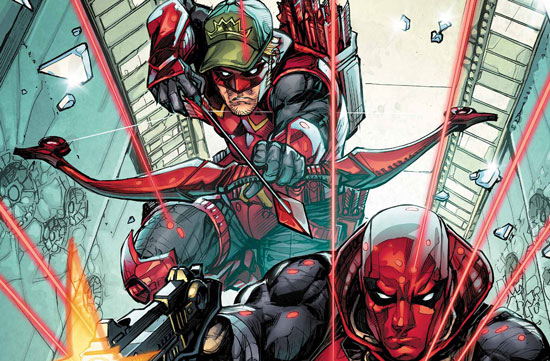 Red Hood/Arsenal #1 brings Red Hood and Arsenal back together again for a new adventure. I really like the dynamic between the two characters, as being friends who constantly one-up each other. In the new DC paradigm, the two have even more in common with them both being the wayward sidekick.

Anyway, the new series has the two of them being reunited at a hostage exchange. There is a lot of action, a few nice fight scenes rendered by Denis Medri along the way. By the end of the issue, the two decide to start working again and we have the new series.

Scott Lobdell writes the characters well, and I think that Arsenal is going to get pushed a bit more to the upfront. Now if he’d only lose that silly hat! 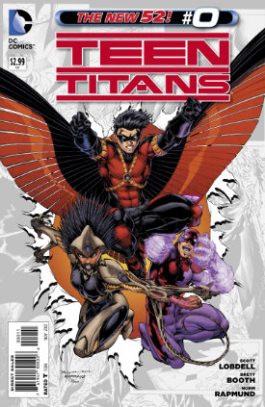 I know it’s been a while; I’ve been spending more time reading comics than blogging about them. Well, that and being increasingly busy in my professional life. So here’s a quick one so I can get back on track.

Teen Titans #0 gives us the backstory of the New 52-ized Tim Drake. Previously Tim was the son of two Bruce Wayne-level wealthy parents, and over the years he had several encounters with both Bruce and Dick Grayson. He eventually figures out their secret identities, and after the death of his mother and crippling of his father Tim becomes the third Robin to avenge his family’s losses.

Writer Scott Lobdell takes the origin in a different direction. He’s a superstar high school gymnast and general smartypants who tries to figure out–unsuccessfully–who the Batman is. To get the Dark Knight’s attention, he hacks the Penguin’s bank account.

That was a surefire way to get everyone attention, with Batman having to save them. As a result, his parents have been put into the witness protection program and have been relocated somewhere in the country and he now has to take the identity of Tim Drake, an adopted ward of Bruce Wayne. At that point Bruce finally reveals that he’s Batman and Tim dons the roll of Red Robin.

The one theme that is hammered into this issue was the relationship between Tim and his parents. They were immensely proud of him and everything that he had been able to accomplish. However, he wound up giving that all away in his quest to unmask Batman. Not only is he isn’t living with them and with extremely limited contact, but they will never know about his true greatest accomplishment: being a super hero.

It’s interesting all around and I’m sure Lobdell is planning on revisiting his parents at some point.