Last week we had Superman and He-Man tussle, this week it is He-Man squaring off against Superman’s biggest competitor during the 1940s and 1950s, Captain Marvel. This might be a close battle because the two of them have more in common with each other than you would imagine.

Even though the two of them run around as some of the most powerful people in their respective universes, their true form is a teenager. Prince Adam and Billy Batson both have a catchphrase–“I have the power” and “Shazam!” respectively–which they utter, turning them into demigod like beings. Both Cap and He-Man are near indestructible and super-strong  They both even have talking tiger sidekicks. Everyone knows about Battle Cat, but did you know that Captain Marvel has Tawny, an anthropomorphic tiger.

The only difference between the two is that Captain Marvel can fly and might be a little faster, and He-Man has the Power Sword. But other than that, it’s pretty much even.

So who would win.

Captain Marvel, as he has one trick up his sleeve. He says “shazam”, and in a flurry of lightning changes from the Captain to Billy. So basically all Captain Marvel has to do is lure He-Man close by and keep saying “shazam” to electrocute him. Then when He-Man is incapacitated, back to Captain Marvel and it’s over. WINNER: Captain Marvel

This is the first of a new feature here on Ridiculous Awesome. Wardrobe Dysfunction is a look into the history, evolution and devolution of what super heroes wear. This week we examine Shazam, who gets a new name, look and origin in this week’s issue of Justice League of America.

I would be remiss without explaining why the Big Red Cheese is getting a name change, after being around for over seventy years. Long story short, even though Captain Marvel is arguably one of the most popular comic book characters of all time–outselling Superman during the 1940s–a legal snafu made by his original publisher Fawcett and DC Comics allowed Marvel Comics to claim the name Captain Marvel for its own publishing purposes. They could still keep publishing stories about the character, they just couldn’t call the series Captain Marvel. So the character would appear in series called “The Power of Shazam” and action figures would be called Shazam.

This wound up confusing a generation of fans, and with the New 52, the revamped Captain Marvel wound up dropping the name entirely and going by Shazam, the word Billy Batson says to transform into a large, super powered being. But enough talk about his history, let’s talk about his fashion sense. 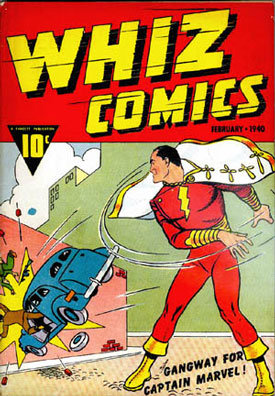 Captain Marvel first debuted back in February 1940’s Whiz Comics #2. The costume–designed by C.C. Beck–is a classic. For the most part, the costume was never really changed or modified. At times, some artists abandoned the tunic detailing or modified the lightning bolt logo. Sometimes they would make the cape longer or shorter, depending  on what was the trend in comics.

What I like about it is that this design is simple, primarily red with yellow detailing.  It works in the sense that it was a simple costume from a simpler time. Best of all, it still holds up by today’s standards. Definitely iconic.

Alex Ross modified the Captain Marvel costume during 1996’s Kingdom Come mini-series. Pretty much the only thing that Ross did to the costume was made the belt a little more sash like.

I don’t know if Ross was technically the first person to sash up the costume, but for whatever reason I associate that costume with his change. A lot of post-Kingdom Come comics that Captain Marvel is in have him with the sash belt. Come to think of it, other than Ms. Marvel, there really aren’t a lot of comic book characters with a similar look.

The 2000s brought a bunch of changes for Captain Marvel’s costume. During the Infinite Crisis period, the wizard Shazam, who granted Billy Batson the power to turn into the Captain, was killed.

Billy wound up taking the wizard’s place, now calling himself Shazam, a precursor to the name change. The red in the costume was switched to white, which helps give an older, mystical appearance. The cape was extended from being waist-length to his feet and given a hood, now much more cloak like. His hair also became long and white, because he’s a wizard. This look was designed by Howard Porter, and it does look really cool. It merges the Captain Marvel style with what a wizard would wear to work perfectly. You’ll notice that the shirt is still a tunic.

To fill the role of Captain Marvel while Billy was off guarding the power of Shazam, Freddie Freeman (more commonly known as Captain Marvel) underwent a series of challenges in the miniseries The Trials of Shazam to see if he was worthy enough to be the next Captain.

Freddie wound up passing with flying colors and assumed the mantle of Captain Marvel. Because he was younger and cooler, he decided to full-time adopt the sash belt and grew his hair out, cause that’s what the cool kids do. This is the way the character appeared for pretty much the rest of the pre-New 52 continuity.

This all brings us to Shazam, the latest incarnation of Billy. When he says the word “shazam” he turns into Shazam, the super powered being that reminds us of Captain Marvel. The costume is very close to the traditional look, except it has the longer hooded cloak that Porter designed. I can’t tell if those are laces on his boots or not. That wouldn’t make any sense, since Geoff Johns said that they plan on taking the character in a more magic/fantasy direction.

That said, as much as I am slightly bothered by the name change, I don’t mind Shazam’s new look. It pays tribute to his roots, but takes it in a different direction.