Spider-Woman #1 was a bit confusing for me, as I’m not currently reading the Spider-Verse stories. However, I really love Jessica Drew. She really is probably one of my top ten characters. Needless to say, I was surprised that this series starts out with her, along with Silk and Spider-Man Noir, riding dinosaurs on an alien looking world.

The group is fighting these weird Team Rocket looking brother and sister duo called the Inheritors, who are killing all the Spider-heroes throughout the multiverse to feed off their life energies.

The whole Spider-Verse story does interest me, but I think this might be something that I’ll revisit once it gets back to just being a book about Jessica. On the plus side, I think this is the best art that I’ve ever seen from Greg Land.

Fun fact…I’ve been waiting a few years to finish reading Secret Invasion. Mostly because It took forever to find the sixth issue of the mini-series.

I picked up the Baltimore Comic-Con 2008 exclusive Frank Cho cover. Why? Because Spider-Woman drawn by Cho is just awesome. So let’s talk about this missing chapter from my collection. Bare in mind, that its been YEARS since I read the mini-series and I’m not going back to look up things. I’m going to live blog this reading experience. Be warned!

The book starts out with Noh-Varr (who most recently betrayed earth) promising the Skrull who thinks he is Captain Marvel that he will protect the Earth. There’s an advertisement for Terminator: The Sarah Connor Chronicles which I seem to have been the only person who enjoyed it. Sigh.

Getting back to the topic, the series is approaching the all-out slug-fest that we all love in comics. One one sand you have the Skrull legions, lead by the impostor Skrull-Spider Woman, ready to take over the planet. A cause which has oddly picked up support from mankind. And on the other, the allied front of registered and un-registered super heroes, Nick Fury’s team of Secret Warriors, Norman Osborn’s Thunderbolts and Kevin Sullivan’s Army of Darkness. Well maybe the Dungeon of Doom. Either way, there was a huge army of Marvel characters and no one representing Sullivan. And in case you are wondering, Kevin Sullivan was a pro wrestler back in the day.

And it’s done. It really was a quick read. On its own, it really doesn’t stand up. But as part of the larger narrative it works. The art by Leinil Yu is phenomenal though. Secret Invasion really made me turn a corner on him with his style. 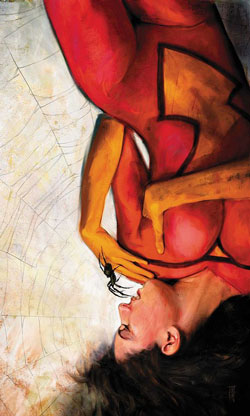 Spider-Woman, how I love thee. There is just so much I love about the character like her mysterious background, distinct powers and even her interesting outlook on her self which was usually self doubting..

So in 2009, when the long-awaited new series for her hit the comics stores, I was more than read. It was written by Brian Michael Bendis (who I consider a ‘friend in my head–radio/television personality Wendy Williams’ term for a famous person that you don’t know personally but would assume you would get along with due to their public persona–due to him being quite the Jessica Drew fan) and had art from Alex Maleev (who never fails to amaze me). Needless to say, this new series was quickly added to my “to read” list.

The first story arc–and sadly the last (which we’ll get to in a second)–had Jessica going off to the crime ridden country of Madripoor to track down a Skrull posing as Spider-Man on the behalf of S.W.O.R.D., a covert task force dealt with tracking down aliens on the planet.

Needless to say, this wasn’t an easy assignment, as not only does she battle with the rogue Skrull, but faces off with the Madripoor police, Norman Osbourne’s Thunderbolts team of former super villains, and HYDRA commander Viper.

Obviously, this story was enjoyable because of its action-packed plot and Maleev’s art. But what makes it stick out is Jessica’s internal dialogue. She’s a very compelling character, filled with self-doubt.

So why was this series cut short? Bendis and Maleev had intended this to be the first ever monthly motion comic, with the print copy and animated version being released on the same day. And you thought day-and-date print and digital comics was cool!

In the collected version, they explain how difficult it was to adapt the art into the motion comic format, and reasonably so. I wish this series would have gone on past its initial seven issue story arc, but the good thing is that it tells a complete story. If your interested in seeing a preview of the Spider-Woman motion comic, Marvel has the first episode posted on its YouTube page (you need to be a registered YouTube member because it has a PG13-ish rating). If you like it, you can buy it on iTunes or on a DVD/Blu Ray.