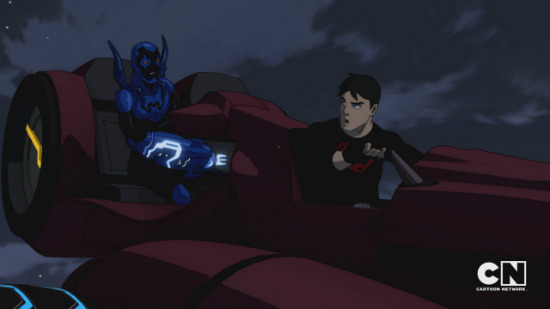 Thanks to actually having a Saturday off, this was the first time in a while I had a chance to watch Young Justice. So what’s going on? Honestly, i have no idea. But thanks to being a long-time DC reader, I’ve been able to pull it together.

Superboy and Blue Beetle went off to stop Intergang, an intergalactic gang that’s been smuggling weapons from Apokolips to Earth. Therbe is a pretty interesting dynamic between the two, with Superboy being the senior member of the group, pretty much treating Beetle like he’s just a kid.

I really liked how they modified the scarab that powers Blue Beetle, having it been a sentient nano-tech armor that Ted Kord created instead of being some relic from an alien civilization. It also looked like the two of them were flying around on the Forever People’s Super Cycle and that Krypto the Kryptonian hound is now some sort of wolf.

Apparently there has been a clone of Speedy running around all these years, and he’s going through a bit of identity crisis.The real Speedy has been long dead/vanished, and the one that everyone has known and grown up with is the clone. And Clone Speedy is not happy finding that out. The episode ends with Clone Speedy’s “wife” Cheshire informing them that he has to get his act together because they have a daughter. Hopefully things will wind up better for this Jade.

This show also drops a lot of references to STAR Labs and Project Cadmus. Between that and Intergang playing a prominent role, it really felt like I was reading early 1990s Superman comics.

It also looks like they have DC animated shorts in between the main show featuring super lame hero Vibe dancing his way into a Super Friends-style clip. I wonder if that was for the parents watching or hardcore comic fans.

Anyway, I think I’m going to make sure I DVR this show. Best part of this review…I got it up about three minutes after the show ended. Go me.

What would happen if the Red Hulk met Superboy? Tiny Titans co-mastermind Franco Aureliani assumes it would go something like this.

Superboy would wind up annoying Rulk. Lets face it; poor Red Hulk isn’t necessarily the life of the party and wouldn’t take to kindly to Superboy flyring around and annoying him like a gnat.

Check out Franco’s website to keep up with his projects.