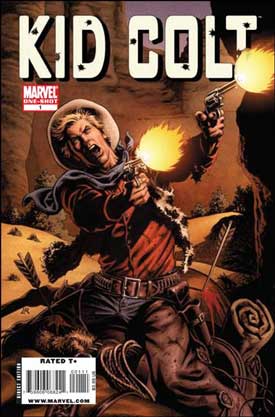 Cowboy comics are one subgenre that has disappeared. Cowboys in general have fallen off the popular culture landscape since the late 1960s. The Kid Colt one-shot by Tom DeFalco and Rick Burchett is an adventure featuring Kid Colt, one of the premier cowboys from Marvel’s history.

The story is very straight forward; it’s a retelling of Kid Colt’s origin and early days through the narration of a man named Everett (I wonder if that was a conscious nod to longtime Marvel creator Bill Everett). The sheriffs are out to find the young cowboy, who has been erroneously charged with the murder of a farmer. Everett is helping Kid Colt clear his name, and along the way there is all the action that you would expect in a cowboy comic book.

This was a fine read; Burchett’s art worked well with the story. This is worth checking out, especially if you’ve never read a cowboy story before. Who knows; you might even like it! 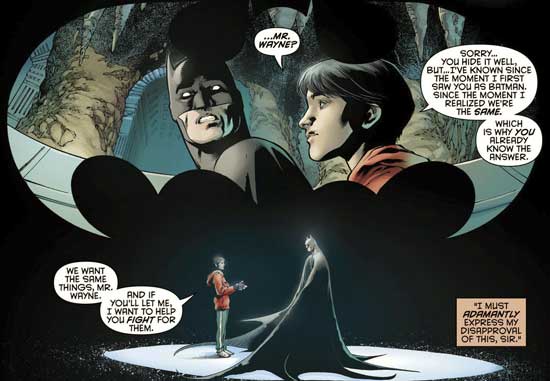 Nightwing #0 was a damn good comic book. It gives a look back to how Dick Grayson wound up joining Batman’s crusade. What I like about this is how it doesn’t attempt to create a new and radically revamped origin; it just enhances the story we already know.

Dick was an orphaned circus performer after his parents were gunned down by the mob. But how exactly did Bruce Wayne wind up getting custody of him? Quite simple; he was to hide out at Wayne Manor until his parents’ murderer was apprehended. There was a bit of a bond with Bruce and Dick, for both having gone through such an ordeal.

But what writer Tom DeFalco added to the mythology was how Dick much smarter than Bruce ever imagined, not only figuring out that he was Batman but helping bring in the murderers. Dick proved to be someone competent enough to become Batman’s partner in crime-fighting.

I like it because this felt like an old silver age story. A lot of fun and a quick read, but superb for the Batman purist.