I’m wishing all the little Hulkamaniacs and Ultimate Warriors a very Merry Christmas! Enjoy the day with your loved ones, family and friends; I certainly will!

WrestleMania VII took place at the end of the Gulf War and American patriotism was at a fevered pitch. This was the most Americana themed WrestleMania, with its red, white and blue themed ring and advertising. The main event had Hulk Hogan challenging everyone’s favorite wrestler turned GI Joe toy turned Iraqi sympathizer Sgt. Slaughter for the WWF Championship.

THE GOOD:  The second half of WrestleMania VII is pretty good. For some reason, there’s a match pitting Demolition against the team of Japanese wrestling legend Genichiro Tenryu and former sumo wrestler Koji Kitao. For whatever reason, I’ve always been a fan of random foreign wrestlers showing up for one-shot appearances like this.

THE BAD: Jake “The Snake” Roberts and “The Model” Rick Martel had been feuding for a while, thanks to Martel attempting to blind Roberts with his personal cologne scent called Arrogance. How cool is that? Unfortunately this wasn’t, as it was a blindfold match. The two kind of stumbled around with bags over the head and this is fast forward-able.

MATCH TO WATCH: Randy Savage and the Ultimate Warrior stole the show with their match. The loser would have to retire from the WWF, so there was a lot of drama throughout. The ending had Warrior barely winning. After the match, Savage’s manager Sensational Sherri berated him, only for his previous manager the beloved Miss Elizabeth coming to the ring to stand up for him. The crowd went nuts with the two reuniting. 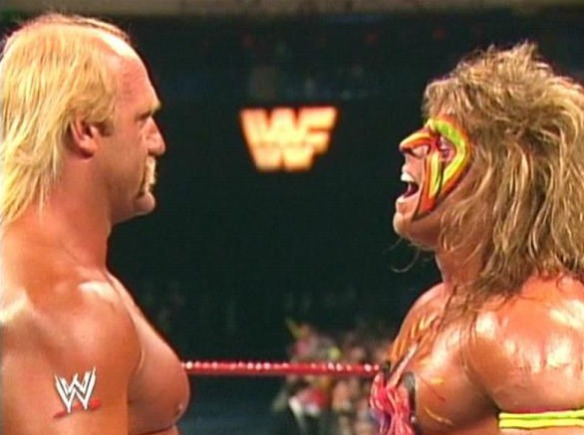 WrestleMania VI was pretty forgettable, except for the Ultimate Warrior/Hulk Hogan match for the WWF Championship. But it didn’t matter, because everyone thought that the Warrior was the most amazing thing EVER in 1990.

THE GOOD: WrestleMania VI was held in Toronto and it is amazing how many future Canadian wrestlers were in attendance. BFF’s Edge and Christian were at the SkyDome that night. So was Lance Storm.

THE BAD: There were three matches that ended in a count out or disqualification. For the big showcase event of the year, you would have hoped that there were a few more definitive endings.

MATCH TO WATCH: I guess it would be the previously mentioned Warrior/Savage match. The crowd is electric for it and win Warrior claims the title is quite the moment.