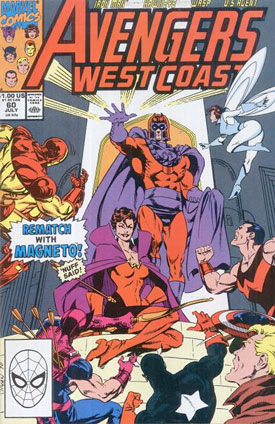 So this was a weird issue. Avengers West Coast #60 was the pack in comic that comes with the Quicksilver and Wonder Man Marvel Universe action figure set. Reading it was like catching a movie after missing the first 35 minutes.

The issue starts with time traveling villain preventing the assassination of John F. Kennedy–with no reason given. Just as you process that, the story jumps to the Avengers West Coast’s base in California which was damaged from a recent attack. They really don’t explain what had happened, but the point is made that everyone thinks that USAgent is a bit of a tool and that they want Hawkeye to take a more active leadership role in the team, which anyone can understand.

The story then jumps again to Asteroid M, where Magneto and Scarlet Witch are trying to get Quicksilver to join their latest evil family scheme, to which he says no. They battle, Quicksilver pulls the teleporting Inhuman dog Lockjaw out of his belt (apparently Pietro likes to carry this poor animal around at all times), and they all reappear at the West Coast compound. There’s fighting and the book ends with Immortus claiming Scarlet Witch as his bride. Wow.

Writers Roy Thomas and Dann Thomas seem to have written this issue in the story of what would be known as crash television in professional wrestling circles. For those of you who don’t know, that’s the style of writing a wrestling program where things are constantly happening in a jarring manner that was super popular in the late 1990s. This comic–even though it debuted way before the crash tv era in wrestling–is a perfect example of it.

I’m all confused now so I think I’ll take a nap.