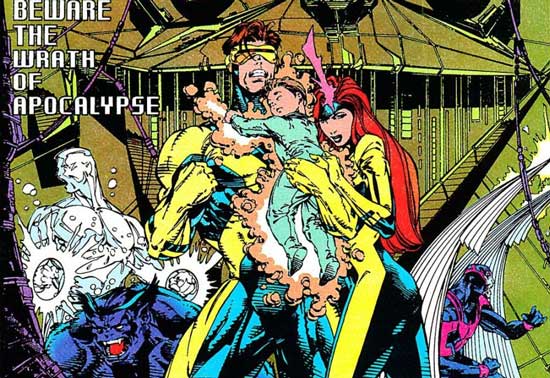 There is a lot of stuff going on in this issue. If there was ever a day where the X-Factor should have stayed in bed, this would be it.

The team’s headquarters is a sentient floating battleship, literally named Ship. Before it was X-Factors mobile base of operation it belonged to Apocalypse. He’s deployed a squad of his minions to not only attack X-Factor, but to infect the ship with a virus that makes Ship lose control of itself and start attacking Manhattan. X-Factor are trying to get Ship back under control while other Marvel characters are helping evacuate people from Ship’s path. What’s remarkable to me is how everyone is so understanding of Ship being out of control. Ship eventually decides that the only way it can get back under control is to commit suicide, which no one in X-Factor is happy about.

As this Ship story unfolds, Apocalypse’s plan to abduct Cyclops’ son Nathan is revealed. It turns out destroying their headquarters was an elaborate distraction. The story leads to the first appearance of the Askani Clan from the future, as a woman member has been sent from the future to protect the baby. People from the future travelling back in time to protect a child was a huge theme in 1991, between this plot and Terminator 2.

The issue is interesting from a creative standpoint, as it was written by the combined efforts of Whilce Portacio, Jim Lee and Chris Claremont, with art from Portacio. It’s like a meeting of the minds of the X-creators in this issue. The backup feature is called Apocalypse Manifesto, with profiles of the powers and dangers of Beast and Iceman from Apocalypse’s perspective. These were written by Fabian Nicieza.

I think one of my highlights from New York Comic Con was getting a chance to meet and speak with Whilce Portacio. I’ve been a fan of his for a long time, and I consider him to be one of the best comic artists from the 1990s. His runs on the various X-books and his own Wetworks projects are some of my favorite stuff from that era.

I got to talk with Whilce at the Marvel booth about a bunch of things, including his favorite projects, some ideas he would like to pitch and even his upcoming run on Incredible Hulk. After such a great pitch, I’m sold. That said, I was super excited to get this Hulk sketch from him. I love that it was a quick sketch and his style permeates it.

Check out Whilce’s website to see some of the current stuff he’s working on. His run on Hulk starts in January.